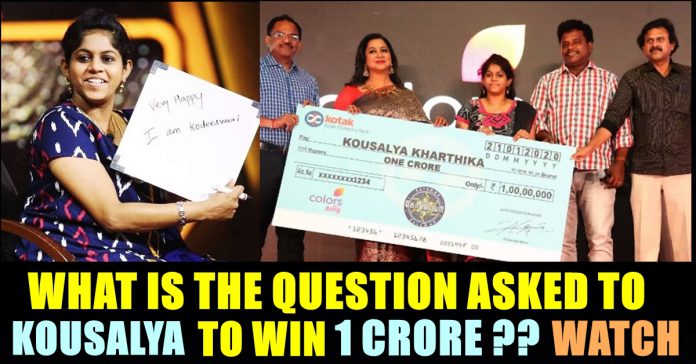 In the reality quiz show being conducted by Colors channel, Kousalya became the first ever person with disability to win the jackpot prize money of Rs. 1 crore. Kousalya Kharthika, 31, hails from Madurai, suffers from speech and hearing impairment and communicates through vibrations and lip-reading.

On becoming a crorepati on Kodeeswari, Kousalya said: “I have always depended on my family members for my day-to-day life. But right from my childhood I have been determined to learn and excel in whatever I do. I am more than honoured to be a part of this iconic game show, and equally proud to tell the world that ‘I am now a Kodeeswari.’

Now Colors television channel, has released a video in their official twitter account, showing the last question asked to Kousalya to win the 1 crore of prize money. The question is about the King Pulakeshin 2’s imaginative brother Nagathanthi. Radhika asked Kousalya to name the historic novel which contained the character Nagathanthi in 1948. The options provided to Kousalya are Parthiban Kanavu, Vengayin mainthan, Sivagamaiyin Sabatham and Yavana Raani. Kousalya after a deep thought answered as Sivagamiyin Sabatham by raising the board which was written as “C”.

This victory of Kousalya made many people happy as she has gave word to help the differently abled school in Nagercoyil. She also expressed her wish to visit Switzerland or Italy which was always been her dream. “If posiible, I would like to buy an own house for ourself” she said.

In the interview, Kousalya said that she likes Jyothika very much for her expressions. Check out the video here :

• Kousalya Who Became The First-ever Differently-abled Contestant To Win Rs 1 Crore On kodeeswari, Says She Like #Jyotika Very Much | @Suriya_Offl | #SooraraiPottru pic.twitter.com/1D7CbrIYEN

Kousalya Kharthika has completed her degree in B.Sc fashion technology, M.Sc in Information technology and MBA degree. Currently, Kousalya works as a Junior assistant at the Principal District Court of Madurai. Kodeeshwari show welcomes female participants to take part in the show and started streaming from December 23, 2019.

Kousalya Kharthika is married to Bala murugan and couple has a 1 year old child and named him as Abhinav. As soon as the news of her success surfaced, Internet pouring wishes for Kousalya. Let us wish Kousalya to have a successful future ahead !! 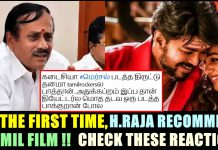 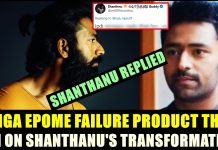 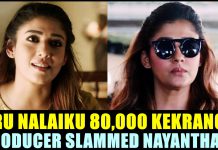