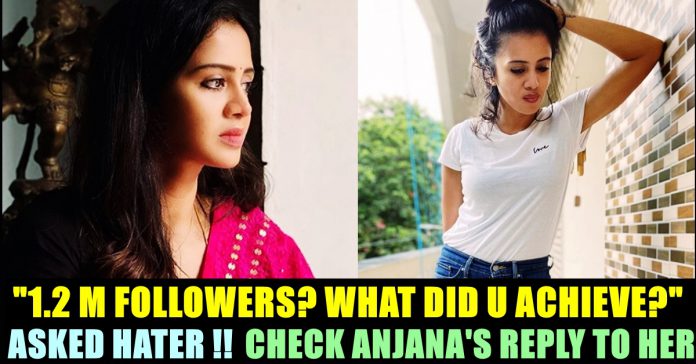 One of the easiest ways to get temporary attraction among the fellow online users is to troll a familiar personality in their social media posts . Posting mean things as comments under the posts uploaded by known personalities only to hurt them and to get likes from people who have similar mindset has became a common practice in this online era.

TV anchor Anjana came across such online user and unlike other TV stars, she didn’t hesitate to give her back the answer she wanted. The Instagram user asked Anjana what did she achieve in her life to get 1.2 million followers in Instagram to which the TV anchor said that she just did her job and the reason behind the huge number is her hard work.

Since the lock down implementation, Anjana is engaging herself by posting pictures of herself from her photoshoots conducted in her terrace and in other places around her house. Most of the pictures in her Instagram timeline were captured by her husband and actor Moulistic.

Being a busy compere, Anjana effortlessly balancing her personal and professional which is evident through her Instagram timeline. Now, amidst this lockdown, the beautiful looking Video Jockey is impressing her followers with her elegant look and stylish poses.

The 30 year old host who enjoys quite a huge fan following in social media due to her unique way of presenting shows, did programs for Sun Music for nearly 10 years. She also hosted audio launches of Kollywood movies. Now, on seeing the wide reach of her every post, one of a follower asked what did she achieve to get 1.2 million followers in the photo posting social media platform.

Anjana who saw the comment, gave her a humble reply saying “Nothing much than being in this industry, doing just my work for 12 years. I didn’t achieve anything ! Nope” she wrote as her reply.

Check out the screenshot of her reply below :

Capturing the screenshot of the same, Anjana wrote, “This!! My base is not out of short term fame !! I have worked hard, steadily and slowly with values and ethics for 12 whole years” and posted it as her story.

Actor Chandramouli and Anjana became proud parents to a baby boy a couple of years back which made the anchor to take a break from her professional career. The couple named their son as Rudraksh and are leading a healthy life. Chandramouli who was last seen in “Thittam Pottu Thirudura Kootam”, is awaiting his “Party” of Venkat Prabhu to release post lockdown. He is also expected to appear in “Nan Seidha Kurumbu” and “Daavu”.

Comment your views on this reply made by the actress !!