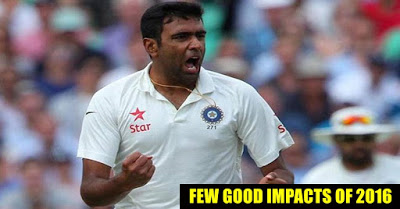 First of all, happy new year folks. Let this year bring everyone prosperity,smile and happiness.

We may have different experiences with 2016, be it bad or good but a year passed could never be brought back again. We had different stories to tell. Witnessed calamities that were never experienced. Lost persons who were much important to our lives. But apart from this, on seeing in a country’s part, few good stuffs happened. So let’s take a furtive glance at few happenings of 2016. This time, pondering over only the good stuffs. Sorry, if we have missed a few.

Who’d have thought after the comparatively easy eliminations of abhinav bindra, sushil kumar an injured saina nehwal crashing out of the tourney mid way, someone would still be there to bring back souvenirs to our country. Well two fine ladies, PV Sindhu in the Badminton and Sakshi Malik in the wresting sections brought us silver and bronze respectively. But apart from that the country stood up in pride to witness a 23 year old Dipa Karmakar, a native or Tripura do the Produnova vault, one of the most dangerous moves in the gymnastics. Though she din’t end up winning any medals, she was widely appreciated, coveted for her bravery and skill.

This time India brought back three medals unlike the summer Olympics at Rio. Devendra Jhajharia, Mariyappan Thangavelu, and Deepa Malik overcame immense odds to take home medals for javelin, high jump, and shot-put, respectively. When the national media din’t show any interest in telecasting the Paralympics, these three broke all odds and brought back two golds and one silver, a feat rare to be achieved in India. Varun Singh Bhati won a bronze in the high jump section to make India’s total medal tally as 4 in the Paralympics.

This one, everyone would have known it. Now there wouldn’t be any household without someone using a Jio carrier service one way or the other. The craze which was started by Mukesh Ambani in his Lyf series of phones, crept it’s way onto few other phones and went all the way, supporting all 4G phones by September. Together Jio has a platform which is more than the network giants Airtel, Vodafone, Idea and Aircel. The secret being Jio’s success is it’s free Internet and calls scheme a.k.a the ‘Jio Introductory Offer’ which provides free internet browsing at 4G speeds and free calls till March 31,2017.

4- The Pause For Coal Power Plants

On the month of December, the Indian government on a view to promote renewable energy sources, decided to stop constructing new coal power plants up and until 2027. Narendra Modi’s government has promised to get 40% of its electricity from non-fossil sources (renewable and nuclear) by 2030, with finance and technology sharing from wealthier countries.

5- A Step Towards Women Equality

This was a great move towards gender equality. In many parts of the state a taboo existed where women weren’t allowed into the temple. India’s Supreme Court finally ruled that temples can’t ban women or restrict their entry. The landmark decision was targeted at the Sabarimala Ayyappa Hindu temple in Kerala which doesn’t allow women aged between 10 and 50 to enter because of the stigma associated with menstruation.

With the latest concluded tours of England and New Zealand, the Indian test team went on to emerge as the toppers of the test rankings. Ravichandran Ashwin then went on to become the best test bowler and Virat Kohli continuing his run streak.

In recognition of her work for the poor in India, Pope Francis declared Mother Teresa a saint in September. Born to ethnic Albanian parents in 1910, Mother Teresa went on to establish the Missionaries of Charity sisterhood in India in 1950, caring for the destitute in Kolkata’s slums, and garnering both praise and criticism for her methods.

Probably one of India’s coveted writers, Arundati Roy who went on hibernation after her much successful book ‘The God Of Small Things’ which was released on 1997 and won the ‘Booker Price’ announced that she would publish a new novel after twenty years. Titled ‘The Ministry of Utmost Happiness’, the novel is expected to release in 2017.

India’s lawmakers approved the country’s biggest tax reform since Independence, the Goods and Services Tax (GST). The GST will replace at least 17 state and federal taxes and bring them under one unified tax structure. Aimed at bringing uniformity on services offered, this much opposed rule would be the chance to put a stop against the litigation on tax frauds.

Aimed at making India corruption free, the current Prime Minister of Free India. Narendra Modi issued a rule stating 500 and 1000 denomination notes were henceforth banned from India. This move went on a stroll garnering both negative and positive feedback. Although backlogs are occurring due to this movement, the government is strict on pursuing it to the utmost extent. Digital India inspired demonetization is sure to make few more drastic changes on how money gets handled in our country. When the entire transaction is made digital, few opportunities would be available to black money hoarders to properly circulate money, a move which expected when goes in full swing would be able to curb black money once and for all. Effectively.