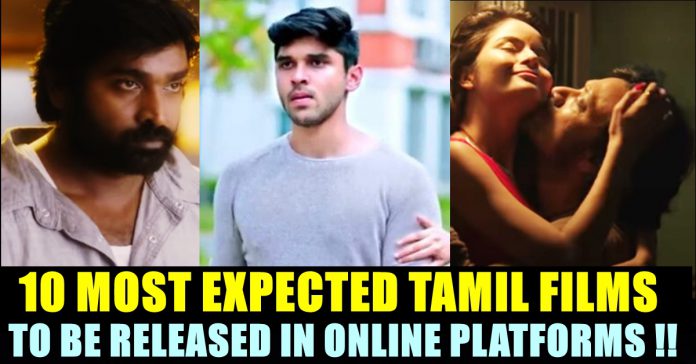 Kamal Haasan’s vision of releasing movies directly in DTH is slowly coming into practice, we must say. The filmmaker who tried to release his movies through Direct-To-Home, Tamil film fraternity literally thrown him out of the industry. Now, as the 2020 is progressing, many Tamil films and webseries made by renowned makers are emerging in online platforms. To our surprise, films are even releasing in online platforms before completing its theatrical run. Kamal Haasan tried to release his Viswaroopam in DTH and he is also planning to release his unfinished “Marudhanaayagam” in OTT.

RK Nagar of Venkat Prabhu gang happens to be the first mainstream Tamil film to have a direct online release. The film which was looking for a theatrical release since past one year, directly got released in Netflix on 19th of December 2019. However, it was taken down for some unknown reasons after getting streamed for close to 6 hours.

Now, the film Dharala Prabhu of Harish Kalyan and Vivek which is streaming in Amazon Prime, had a theatrical run for just 6 or 7 days. Due to the lockdown crisis, the makers of it decided to release it in OTT platform as the entire nation is in quarantine. Kaithi of SR Prabhu released in hotstar before completing 30 days theatrical release. Gautham Menon, a 10 film old refined filmmaker made a web series named as “Queen” for ZEE 5. These vast changes evidently proves that OTT platforms are going to acquire the future of Tamil film industry in big time.

Let us see some of the unreleased, shelved projects which would get a OTT release in near future.

The long awaited Rendavathu Padam was supposed to be the second film of director C.S Amudhan who is known for the only spoof film of Tamil film industry. The film had actors Vimal, Richard, Ramya Nambeesan, Aravind Akash in the lead roles and the fans of Tamizh Padam are still enquiring about the film’s release to the director in Twitter.

“Varma”, an unreleased version of Telugu blockbuster “Arjun Reddy” has Vikram’s son Dhruv in the lead role. After watching the final version of the film, actor Vikram and E4 entertainments who thought that it should not be a debut Dhruv, went on to make a new film titling “Adithya Varma”. Now, Bala is thinking of a online release for his version.

Karthick Naren’s dream project “Naragasooran” is yet to see the light. The film which was reported to be a productional venture of Gautham vasudev menon, facing financial issues to get a theatrical release. Now, the 25 year old filmmaker is looking for a right platform to sell the film.

if “Idam Porul Yeval” is a human being, he/she could have died of old age now. The long awaited Vijay Sethupathi- Vishnu Vishal starrer is struggling to get a theatrical release despite of its ensemble starcast. The film directed by Seenu ramasamy is likely to get a online release soon.

The SJ Surya starrer “Iravaakalam” impressed the audience through its intriguing teaser. However, makers the film failed to provide the extended version of it to their audience. Directed by “Game over” fame Ashwin Saravanan, the film will be watched by large number of audience in OTT platforms.

Venkat Prabhu will release his “Party” starring Mirchi Shiva, Jai, Sathyaraj, Chandramouli, Nivetha Pethuraj, Regina Cassandra, Ramya Krishnan, Sanchita Shetty before the release of “Maanadu”. The film which was certified as a U/A film by censor board, would garner a massive response if it gets an online release. Teaser of the film released during December of 2017.

G.V Prakash has half a dozen of films unreleased as a hero. “Adangathey” is one among those, trailer of which released in the year 2018. Directed by Shanmugam Muthuswamy, the film’s music was composed by the protagonist himself. This film is also expected to get an online release soon, considering this lockdown situation.

Trailer of this Selvaraghavan’s directorial is a massive hit due to the dialogue delivery of SJ Suryah. Fans are still waiting eagerly to witness this horror thriller and the plans are underway, according to sources.

The film which was supposed to be a debut film of Kalidas Jayaram and Megha Akash, completed a long time ago. Directed by “Naduvula Konjam Pakatha Kanom” director Balaji Dharanitharan, the film gained a huge expectation but still struggling to release. Reports suggests that the digital rights of the film is with Zee5 originals.

The film which completed during 2012, contains the hit combination of Vishal and Sundar C. The film had Anjali, Varalakshmi menon in female lead roles and it is high time for the makers of it to think of a online release of the film.

Comment your views on watching these films by being at home in this quarantine period and let the makers of it to know !!