Celebrities 10 Unknown Facts About RJ Balaji
Share on Facebook
Tweet on Twitter
An Indian
radio jockey, comedian, actor and above all, a very good human being, RJ Balaji has been a favourite to most
of us. His comedy sense has made us laugh our head off and his sense of
humanism has made our hearts all teary eyed! Nonsense humour and nonstop
talking  are his USP.

On his Birthday today, lets wish him a very Happy Birthday and see few unknown
facts about him…
1. His original name is Balaji
Patturaj and he was born on 20th June 1985.

2. He failed his 12th grade, but
later passed it to do his  B.Sc computer
science from the Kumararani Meena Muthiah College of Arts in 2006 and Postgraduate Diploma in Journalism from  Amrita School of Communication in Coimbatore.

4. He joined NDTV, but when he was
told to write a report, the 56–word report contained 47 grammatical errors. He
knew then, that English Journalism was not his forte.

5. Seeing a newspaper advertisement
for a radio jockey in Radio Mirchi(Coimbatore), he auditioned for it by singing
a gaana song but wasn’t selected. Late in 2006, he did get selected, while he
still hadn’t completed his journalism course. 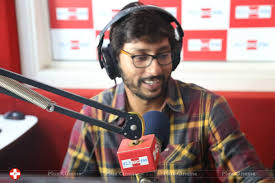 6. His first show was a three hour
morning drive called Hello Coimbatore, after four years when he quit and came
back to chennai.

7. He started working at BIG FM, and
created his own prime time show called Take It Easy and Cross Talk where he
made prank calls to people. Also, the 120 Rs show was a major hit.

8. He acted in some major hit films
like Theeya velai seiyanum kumaru, Vaayai moodi pesavum, Naanum rowdy dhaan,
Jil Jung Juck and more. He even got nominated for SIIMA awards for Best
Comedian for the movie Naanum rowdy dhaan.

10. His other works include – he gave
an intro in “The Madras Song”, a tribute to the 375th anniversary of Chennai,
played in the 2015 edition of the Celebrity Cricket League, he joined Ananda
Vikatan and Raghava
Lawrence’s campaign
“Aram Seiya Virumbu”, created “Panjumittai
Productions”, a YouTube channel where
he uploads short videos dealing with contemporary issues.

Balaji is a
well known face during the recent Chennai floods and been a strong pillar of
support.  Although
known to actively perform social services, Balaji does not consider himself a
social worker or disaster manager: “I am just someone who wants to help
people, and I will just do that.”

He has always believed in
only one thing: “To be good and do good work rather than be famous. So
whatever I am doing, be it professionally or working for a cause, I intend to
do my best.”