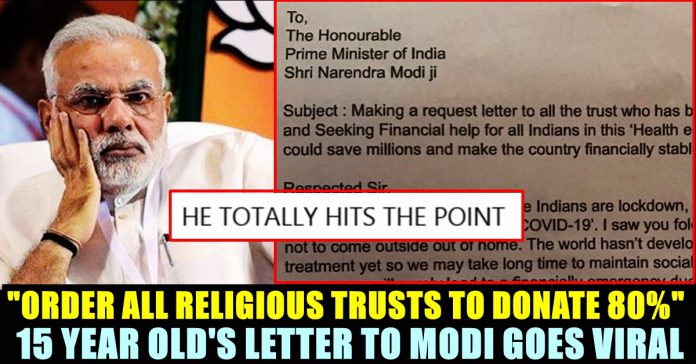 As the whole country is suffering due to the threat made by the deadly virus Coronavirus, both state and central government proposed public people to donate money to combat the virus. Prime Minister Narendra Modi had announced the emergency relief fund on Saturday last week to invite contributions from the citizens as the country is yet to face the worst.

Reliance industry announced a donation of Rs.500 crores to the PM Cares. Engineering & construction giant Larsen & Toubro accepted to donate Rs.150 crores to the relief fund. Board of Control for cricket in India announced Rs.51 crores and several other sports and cinema personalities came forward to donate their part for PM Cares.

Here’s the Twitter post of Narendra Modi requesting the people of India to contribute in the Pm Cares :

The PM-CARES Fund accepts micro-donations too. It will strengthen disaster management capacities and encourage research on protecting citizens.

Let us leave no stone unturned to make India healthier and more prosperous for our future generations. pic.twitter.com/BVm7q19R52

Meanwhile, a letter of class 10 student to Prime Minister Modi regarding the relief fund has surfaced in the media. He suggested PM Modi to order all the religious trusts to donate 80% of God’s wealth to fight the Covid 19 in his letter. The 15 year old Abhinav Kumar Sharma, is currently studying 10th standard in Dehradun. His brave suggestion to the PM of the nation is being lauded by the users of social media as his point makes sense.

In his letter, Abhinav said “This health emergency will surely lead to a financial emergency due to which beggars, laborers etc would be on the verge of starvation. This lockdown may close small industries, factories, business. Unemployment may rise due to business. Our government is also fighting strong and distributing all basic amenities which will make Government money empty soon.” in his letter.

“I therefore request you to Kindly request and make it mandatory for all religious trust irrespective their religion to donate 80% amount of “Gods wealth” to country by giving this to PM relief fund. I am sure god would be happy to bless us if this money saves gods children. We all will have more faith in humanity. Thanking you” the letter further reads.

Here’s the letter sent by Abhinav to Modi :

This letter from the young laud is being widely shared by the users of social media. Many of them agreed with the point he is making. The deadly virus has killed more than 37,000 people across the world and the positive cases in India are increasing in daily manner.

Comment your views on the proposal made by Abhinav !!