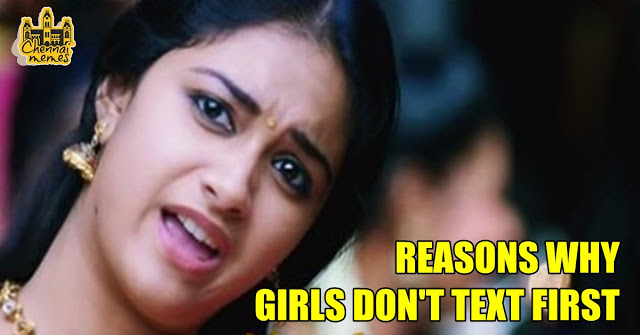 This has always been a big point of discussion. This is because she may think if they’ll text first, it will come off as they’re trying too hard or they think that they may seem annoying to the guy they’re Texting. A lot of things come into a girl’s mind when they have to text someone especially a guy. There stand many reasons (some are too weird indeed) standing behind a girl’s conception towards not texting first but some of the reasons are stated below.

Will she ever appreciate a revealing pic of you in the early stages of your conversation? Think again. You won’t ever get a text if you do this.

She might think like if she’ll text a guy, she’ll learn a slangs and will be using those in her life and which isn’t a good habit actually. So, to avoid this all she doesn’t.

This is the kind of zone about every guy hates and about every girl loves. This happens if she thinks you have some second thoughts about her and she limits you to “JUST FRIENDS.”

Girls often think that if they’re texting a guy, the will have to talk in a dirty way as he’ll force them to so they avoid.

5. She Wants You To Chase

If she wants to be playful and considers it better that you will and you can chase her down, she will never text you first.

Girls sometimes think that they are special creatures of god So, wasting their time on the ordinary ones isn’t of their kind.

7. She Doesn’t Know The Start

Many girls don’t know what to start with so, she’s afraid if she’ll start and it won’t go well but she’s dying to talk.

8. Don’t Want To Be Annoying

If you’re busy, she doesn’t want to be a reason to disturb you and make you think that she’s annoying.

A girl gets more than a 50 texts and she doesn’t have time to reply to all even and forget that she’ll text you first.

10. Texting Back Too Quickly

Don’t ever be so excited towards her text as she might think that you are a desperate loser and then she’ll stop even replying your texts
11. Once Upon A FUN
It doesn’t matter how much interesting was the talk, she’ll not take anything serious and hence, all the positive conversation goes in vain.