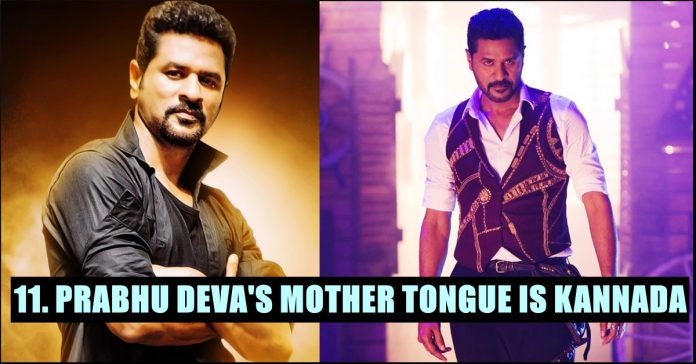 The celebrity started his career at the beginning of the 90’s as an actor in order to have real experiences of acting for 25 years. Prabhu Deva also fondly address by his fans as the Indian Michael Jackson.

Prabhu Deva. That’s quite a nice name. However, Prabhu Deva was named ‘Shankupani’ when he was born. Predictably, he shed his birth name & adopted a much stylish screen name for the betterment of his career. With the fame that he has earned with his screen name, Prabhu Deva made his near & dear forget all about his birth name. Although he is Indian MJ, Prabhu Deva was first trained in Bharatnatyam & was tutored by two professional dancers, Lakshminarayan & Dharmaraj. During his training, Prabhu Deva came across a Michael Jackson video & was awed by his moves. Unknowingly, once during a training session, he pulled off a MJ dance move & was admonished by his tutor. Later, Prabhu watched many more MJ videos & became the fluidic dancer he is today. Not many know that Prabhu Deva started choreographing at his teenage. Whenever his father was overloaded with projects, he would delegate Prabhu Deva to & go choreograph some of the films that his father had accepted. Out of respect for his father, directors allowed Prabhu to choreograph their films. So, unofficially he made his debut in his early teens. Officially, he debuted with Vetri Vizha, a Kamal Haasan starrer, in 1989. Due to the fluidic dance moves, dancers suffer from different physical ailments. Although it isn’t his back which is problematic, it is his neck which is his kryptonite. Since god knows when, Prabhu Deva has been suffering from spondylitis & sees to that he doesn’t put too much stress on his neck. The individual prowess of directors Shankar & K. Balachander inspired Prabhu Deva to take up direction. Although his career shift may seem strategic, Prabhu Deva, in an interview, told that the shift wasn’t planned. He donned the director’s role without much premeditation. Also, he likes Dasari Narayana Rao & Raghavendra Rao in Telugu Cinema. Upon his teachers’ insistence, Prabhu Deva started his own dance academy which is located in Singapore. Years ago, Prabhu Deva was at a loss as to how to proceed with his teaching profession. However, he went ahead & decided to set it up. Prabhu Deva Dance Academy PTE. LTD. was established in 2009 & went live since then. This shows the commitment he has towards dance. Alongside doing acting on screen, he was busy with the dance choreographer proficiency he used to have; eventually, he became one of the most successful directors and producer of the industry. Unveiled the Michael Jackson’s Granite Statue: A 12-feet statue of pop king Michael Jackson was inaugurated at a Chennai university and the statue were unveiled by the multi-faceted Prabhu Deva who was also there arrived as the special guest.

As many of us presume Prabhu Deva’s mother tongue is not Tamil and he is basically hail from a Kannada speaking family. Prabhu Deva was born on April 3rd, 1973 in Mysore Karnataka. He is well known for his dancing skills across all the corners of our country.