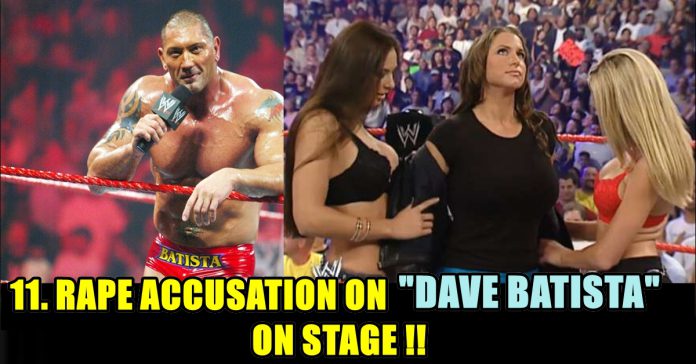 We have all grown up watching WWE, haven’t we? But, we don’t really have any idea about what actually goes on and what is aired on TV. There are numerous such WWE moments that never made it to our television screens. Let’s just say it was too hot for TV!

WWE moments that were never telecasted and for obvious reasons!

Well, I don’t remember watching this episode in particular but man these ladies can definitely start a feud. So, apparently, Trish was having s*x with Vince at the back of the limo, and Stratus was moaning way too loudly. But when Stephanie headed towards the limo and climbed in she found that it was all a facade to lure her outside!

He was a kinky s*x obsessed wrestler. I mean everything he did seemed to have s*xual indication or content. Well, I suppose the adult content was more acceptable towards the crowd in the arena because of it sure as hell was packed. He once walked into the ring with a legit bondage costume on.

3. Trish Barking and stripping inside the ring.

Oh my my, this girl really knows to pull off an adult script. She was legit barking and kneeling like a dog and stripping inside the cage. And she was doing all these because Vince wanted him to humiliate her, and of course, men found this arousing.

Well, Dawn and Torrie were good friends until Dawn decided to have a love affair with her father Al. He went on to marry Dawn in their underwear. And they consummated the marriage to the extent that it actually killed him.

Perhaps the strangest and creepiest scene of all times ever shot. Kane apparently had a girlfriend named Katie who died in a car crash and the feud started when Triple H went to the mortuary to have s*x with her dead body, which was obviously a mannequin. And, the rest is history!

Well, as a rite of passage the bikini diva contests were common back in the 1990s and 2000s. But, what shocked everybody was that during the show on live TV Sable revealed the Playboy magazine cover which apparently had only two handprints covering her Br*asts. And, there was absolutely nothing Vic could do nothing about it.

7. Miss Kitty reveals it all.

Miss Kitty, Kate, was always the one to bend the rules. Being a big fan of showing her body she always wanted to rip off of her clothes every chance she got, revealing her breasts. But, she got away twice with it.

Before ECW was canceled and Kelly moved on to be one of the most successful wrestlers, Kelly had to do an extreme striptease to really arousing music every week. And after stripping she had to dance in the middle of the ring in scantily clad clothing.

Well, there was a legit reason these two were R rated superstars. He cashed in his first ever win in 2006 and decided to have a live s*x celebration in the middle of the ring. They both undressed each other and went under the duvets but Lita’s breasts were accidentally revealed and thus their fame. This is probably one of the steamiest WWE moments.

Well, these two were not really each other’s cup of tea and during one of the matches, Mickie was almost defeated. But, then she grabbed Trish between her legs tightly and licked her fingers. Creepy, I know!

These two were a couple, and WWE created a storyline where Melina was apparently raped by her lover. Before the episode could go on air Bautista got injured and it never made it to our TV screens.

As far as WWE moments and bizarre storylines go, it was on such episode where after being defeated Stephanie had to perform lesbian acts on other wrestlers. She refused to do so and hence it never went on air.