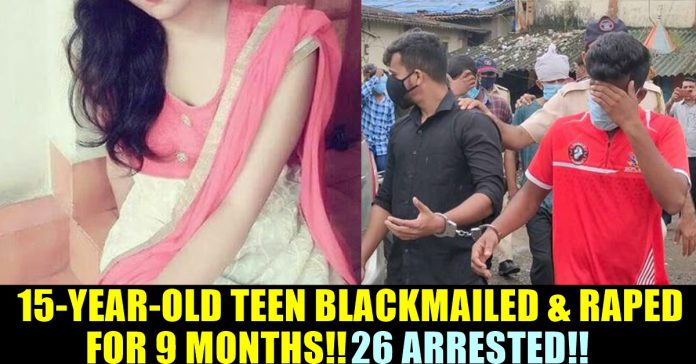 A 15-year-old girl has raised a complaint against 29 men assuming that they have gang-raped her. This shocking incident has taken place in Maharashtra. The girl reached out to the police on Wednesday following which the accused were arrested.

The victim has attended a birthday party with her aunt. Her aunt has seen the girl uninterested and stuck with phone calls and messages. Through someone, the aunt was intimated that the girl is facing some issue. The aunt has kept an eye on the girl for a week. She gained the girl’s trust and the girl narrated the complete incident. The aunt reached out to a social worker who suggested that a trap be laid to nobble the rapists.

Following this, the girl arranged for a meeting with the accused. Along with them, the girl went in an auto-rickshaw. The girl’s aunt, uncle, and the social worker followed them in a separate auto rickshaw. Unfortunately, their auto-rickshaw had a punctured tire and they lost their track. And they informed the police. The girl shared her location with her aunt. By the time the police reached the place where the girl was taken to, she was gang-raped by six men. Two of them were caught while the rest escaped the moment they came to know about police arrival. On Thursday the rest of them were caught.

The girl has informed the police that in January 2021, her boyfriend shot a video of them making out. With the shot video, he has blackmailed the girl to sleep with his friends. From the information gathered from the girl, it has come to light that this has been going on from January to September this year in Dombivli, Murbad, and Badlapur in the Thane district, and Rabale in Navi Mumbai. The Manpada police in Dombivli, a town neighboring Mumbai have booked a case on 29 men of which 26 have been arrested. 2 minor offenders have been sent to juvenile remand home. Cases have been filed under the Indian Penal Code and Protection Of Children From Sexual Offenses Act (POCSO). The people that were arrested have been remanded in jail until September 29. All these men are of age group 16-23 and are students.

Police have informed that there has been no evidence of any video been shared from the boy’s mobile to the victim’s mobile to blackmail her. They further added the mobile will be sent for forensic analysis.