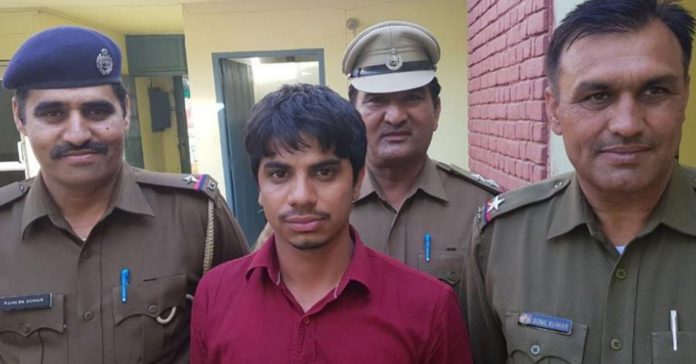 Rajesh Malik (40), an  English lecturer at Shaheed Dalbir Singh Government College in Sonepat’s Pipli village was shot dead by his student Jagmal Singh from Rohtak who was studying in B.A 2nd year.

The crime investigation agency (CIA) of the Sonepat Police arrested him on Wednesday. The boy was angry at his teacher because of the teacher complained to his female friend’s parents about him talking to her in the classroom. “Around two months ago, Malik had scolded Jagmal for disturbing the class by talking to a girl. Jagmal had fought back, asking the teacher what was his problem if he was talking to his female friend. Due to Jagmal’s rude behavior, Malik complained to both his and the girl’s parents about them talking and disturbing the class,” said inspector Indivar Singh, who headed the CIA team that nabbed Jagmal within 36 hours.

The Inspector also said that the girl started to avoid Jagmal after Malik complained to her parents.

“This made Jagmal angry. He held a grudge against Malik and started planning his murder one month ago along with his friends,” Indivar said after a preliminary interrogation of the accused.

According to Hindustan Times, On Tuesday morning, he stole his uncle’s licensed revolver and went to the college and fired four shots at Malik who was sitting at the steno room with his 14-year-old daughter. Jagmal managed to escape unchallenged although a clerk witnessed the attack. Malik was rushed to a hospital where he was pronounced dead on arrival. The principle of the college, Ravi Prakash Arya said that Malik always tried to maintain discipline in the college campus as eve-teasing and harassment of girls are heavily restricted. It is necessary for the faculties of the college should maintain the discipline of the educational institution.

The police said Jagmal’s friends helped him board a bus to Gurgaon to stay with his cousins. Late Tuesday night, he boarded a train to Rewari and spent the night at Rewari railway station. On Wednesday morning, he took a bus for Rohtak to stay with a friend when the police nabbed him.

Police have arrested Jagmal’s two friends who were involved in Jagmal’s escape. They also arrested Jagmal’s uncle Dinesh Singh whose revolver Jagmal used to commit the murder. Police also says that there was an assistant professor’s act involved in this murder as they believe she might provoked Jagmal on doing the murder but her deeds in the entire incident is still unproven.