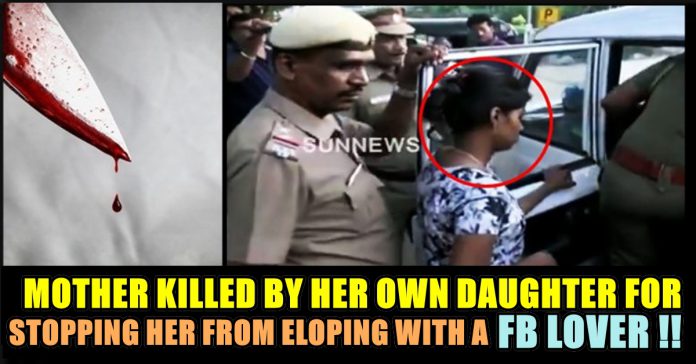 A second-year college student allegedly killed her mother at Tiruvallur on Monday, when the woman attempted to stop her daughter from eloping with a man whom she reportedly befriended over Facebook.

Police said Devi Priya, 19, a resident of Anjaneyapuram, had befriended one Vivek through Facebook six months ago. “Recently, her parents found this and restricted her from going out and using her cell phone. She informed Vivek and decided to run away from home to live with him,” said a police officer.

According to the police, Sivagurunathan, a resident of Anjaneyapuram in Tiruvallur taluk police station limits, works in a private company. He lives with his wife Banumathy and two daughters — Chamundeswari and Devi Priya, a college student. Devi Priya befriended Vivek, 19, of Kumbakonam, over facebook, police sources said. A few days ago, she contacted him and requested him to take her to his hometown.

Around 3.30 p.m., the youngsters reached her house. On seeing Devi Priya all decked up, Banumathy questioned her. She revealed her plan to elope.

“As she was packing her bag, her mother Banumathi learnt that she was leaving the house and stopped her. In a fit of rage, Devi picked up a kitchen knife and stabbed her mother in the presence of the two men,” said the officer.

The men who witnessed the incident escaped from the house but the neighbours who spotted blood stains on the men’s shirts nabbed them and handed them to the police.
The police has arrested Devi priya, Vivek, Vignesh and Sathish. Banumathy was rushed to the hospital, but succumbed to injuries.