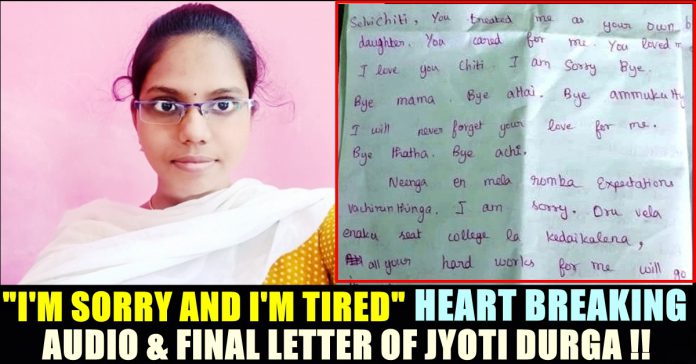 Yet another student who was preparing for NEET ended her life in the fear of facing the examination. Named as Jyoti S Durga, the 19 year old girl ended her life by hanging in her home in Madurai in the early hours of Saturday. The medical aspirant was attending coaching classes to prepare for her NEET exam for the second attempt. She had written the NEET exam last year but only managed to score 100 odd marks.

Hear audio audio she recorded before killing herself :

The girl ended her life after writing a suicide note. She mentioned that she would disappoint her family members and others if she did not get a medical seat, in her 6 page long suicide note. Apart from the suicide note, she also left behind a video recording in her phone. But the content of the video was not immediately known, police said.

Here’s the letter she wrote before killing herself :

“You people had so many expectations on me. I am sorry. If I can’t get the medical seat in college, all your hard work will go in vain. I am sorry and I am tired” her letter read.

Police sources said that she studied even during the night of Saturday. Later she went to sleep. Her father, Murugasundaram, is a sub-inspector attached to 6th battalion police. After everyone in the house slept, she woke up and hanged herself in the hall. A team led by Tallakulam police inspector Malaisamy was conducting an inquiry.

Speaking to the media, the girl’s father said that she studied well and would have got marks over 550. “But she has been depressed. She spoke to us well in the night. In the morning we realised this has happened.” he said.

Two more 19 year old students died by suicide last month. In Coimbatore district, R Subashri took her life away in August due to the fear of facing the entrance exam. Her death had come after a day after the Supreme court dismissed pleas seeking postponement of the examination. Last week, a young lad named as Vignesh who belong to Ariyalur district killed himself due to the fear of facing the exam. Vignesh was about the write the exam for the third time after two attempts in the past.

This news has created huge outrage among the netizens who are demanding the immediate ban of examination. Several influential personalities including cinema celebrities have raised voice against the examination after the demise of Jyoti Durga.