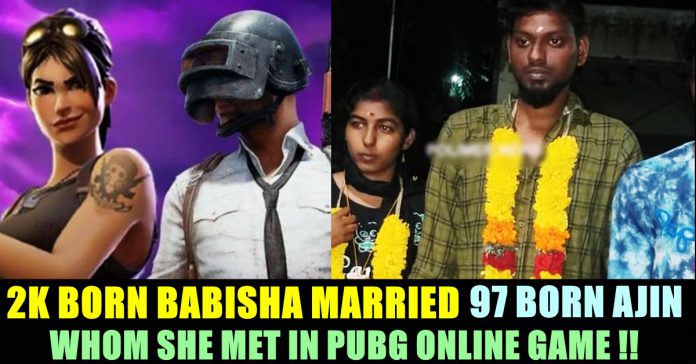 A first year college student who discontinued her studies, got married to a youth whom she met in PUB G game. On September 2, 118 applications, including PUBG Mobile, have been banned by the Indian government. The multiplayer Battle Royal game in India had a large user base and the banning of the game came as a shock to them. The game has now been removed from both the Google Play Store and the Apple App Store. However, in smartphones where PUBG Mobile is already installed, players can still play this game. Many players in India are still playing the game, who installed the game before it was banned.

However, the game is expected to get completely blocked in India anytime soon. Meanwhile, a girl who belongs to Kanniyakumari district, fell in love with her fellow PUB G player while playing the game and they both got married which left the netizens, especially the male PUB G players in a shocked state.

20 year old Babisha is a daughter of Sasikumar who is a Lumber merchant. They are living near a panchayat town named as Thiruvattar located in Kanniyakumari district. She was studying first year in a private arts college located in Thiruvithamcode area. She was forced to discontinue her studies due to her addiction in the PUBG online game, according to Polimer news.

On September 19, Babisha disappeared without prior information to her parents. Dejected parents, registered a police complaint in Thiruvattar police station and the officers were searching for her since then.

At the time, Babisha shocked her parents and police officers by appearing in front of them in marriage attire with a youth named as Ajin Prince. She reportedly said to her parents that she got married to him who belongs to Thiruvarur. The 24 year old Ajin Prince and Babisha became familiar with each other through the PUBG online game.

Babisha said that Ajin Prince took care of her in the game and helped her to win the Chicken dinner in the PUBG game. She who got impressed with his kind gestures, said to her parents that she decided to accept him as her life partner.

The couple struggled to meet each other due to the ongoing lockdown situation. On 19th, Ajin reached Babisha’s place with a car to meet her. Babisha went along with him to marry him. The couple requested Police officials to provide them safety due to the threat made by their parents.

As both of them are major, Police officers convinced the parents of both of them and arranged for their marriage. Both of them changed garlands in a nearby temple and got married with the presence of their parents. After that, Ajin left to Thiruvarur with his wife, Polimer reports.

This news came in as a shock to 90s kids who are struggling find life partners. Comment your views on this PUBG marriage !!