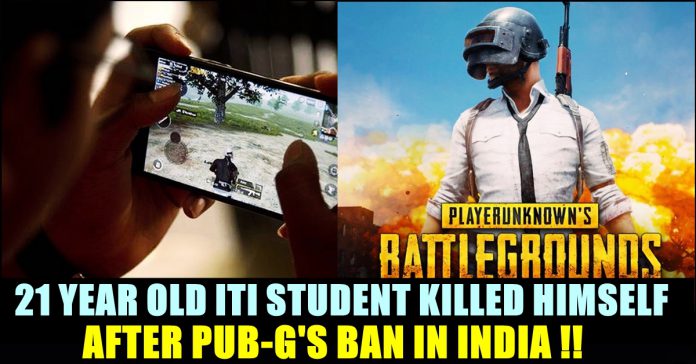 In a shocking incident that took place in West Bengal’s Nadia district, a 21 year old male student named as Pritam Halder, killed himself allegedly due to the upset over the ban implemented on PUB-G online game. He was studying ITI, according to the cops. PUB-G game acted as an addiction among the youngsters of India as we evidently saw the app being downloaded by millions of people in the country since past one year.

It has emerged as one of the most popular games in India and perhaps that’s the reason why it is giving sleepless nights to parents, schools, universities, and the young gamers who are addicted to the game. Recently, the massively popular game gained notoriety after cases of addiction were reported to the National Institute of Mental Health and Neuro Sciences. In fact, many schools in our country have begun to warn parents about the ill-effects of playing the game for hours at a stretch.

On 2nd of September, Central government has banned the widely played controversial game Pub-G along with several other mobile applications in India. This action was taken by the Indian government amid the tension over China’s provocation in Ladakh. There were more than 33 million PUB-G players are actively playing the game. The game clocked 13 million daily users, reports suggested.

The 21 year old Pritam Halder was seen hanging from a ceiling fan at his residence in Purba Lalpur locality within the limits of Chakdaha police station in Nadia district of West Bengal. Ratna, mother of Pritam said that he went to his room after having breakfast on Friday.

In the afternoon, when she went to call him for lunch, she found that he had locked the door from inside. She banged the door multiple times but he didn’t open it. Thereafter, she called the neighbours who then broke into the room and found Pritam hanging from the ceiling fan.

A 21-year-old student allegedly committed suicide by hanging himself from a ceiling fan at his home in West Bengal's Nadia district as he was frustrated over not being able to play PUBG: Police

After talking to the family member’s of the deceased, police also believe that he took the extreme step as he was unable to play PUBG. A case of unnatural death has been registered.

“In the interest of sovereignty and integrity of India, defence of India and security of the state. And using the sovereign powers, the Government of India has decided to block the usage of certain apps, used in both Internet and non-mobile Internet enabled devices. These apps are listed in the attached appendix” the Ministry said regarding the ban.