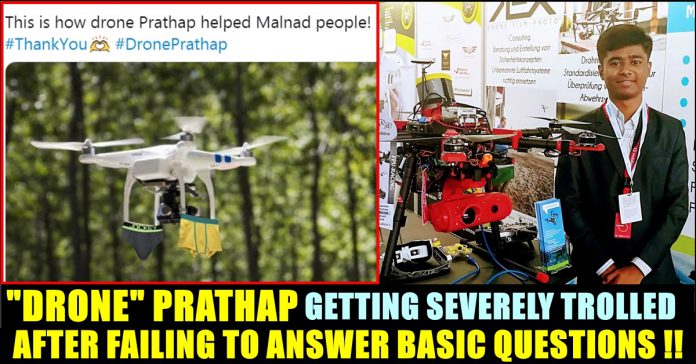 Prathap NM who has been dubbed as “drone boy” and a drone scientist for making over 600 drones by using electronic wastage such as broken mixer grinders, television etc failed to answer basic questions which instigated several trolls in social media platforms. The 22 year old became a subject to severe online criticism after the video of the interaction got surfaced in the interview. The son of a farmer had reportedly claimed that his inventions fetched him honour across the globe. The science grad reportedly building drones since he was 16.

In a recent interview he participated for a local channel, the boy from Karnataka refused to answer the basic questions asked to him regarding basic aerodynamics. He also failed to showcase some of the drones he has made. Enormous number of Internet users and science students criticized Prathap for being “fake” and noted that any first year student would have been able to answer the questions that Prathap refused.

Despite of the multiple awards he bagged for making the machine, the “drone” boy of India, on BTV news, has claimed that he will be emailing the certificates but it is not the time or platform to explain basic aerodynamic quintessential to drone engineerings like lift and drag.

The guy in the left doesn't even know what's lift and drag in aerodynamics and he's talking about building drones….#DronePrathap #droneboy #fakeprathap#boycottprathap pic.twitter.com/QMAjhecCPU

Reports emerged saying that Prathap, has been found to pass off drones made by Japanese and German as his own. Report also claimed that Prathap won the Albert Einstein innovation gold medal at CEBIT expo held in Hannover Germany in 2018. However, it has been confirmed that there is no such award at the CEBIT summit.

In a recent interview with a Kannada news channel, Prathab showed a photo featuring himself with a drone and he claimed to have built it. Later, a statement from German drone maker Billzeye suggests that the owner of the company, Bill Gutbier, let him take a photo with the drone at the expo.

In his instagram account, Prathap uploaded a photo of himself with a drone from the Japanese company ACSL. the company also denied any involvement with him on building drones. Prathap is demanded by several news media portals to comment on the claims and is expected to provide a proof for the 600 drones he claimed to have build. The certificates Prathap showed to media claiming that he has won them from various foreign countries, contained no authentic logos. In one of the certificate, the term “vehicle” was written as “Vehical”. On being questioned about it, the “drone” boy said that it was his fault to misspell the word and stated that the mistake was not committed by the organisers.

Check out some of the reactions surfaced in Internet regarding his claims :

Earlier today, reports said that Drone Prathap was held by police for violating lockdown rules. He was missing from home since Saturday, according to reports.