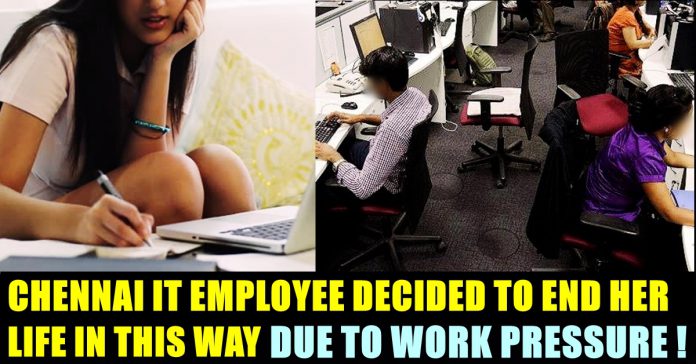 The ongoing lockdown crisis forced, not only IT employees but many other computer system based workers to work from home. Using the opportunity, many firms are requiring their employees to work more, probably more than the time they would usually work in the office which causes mental risk for the employees. A 2017 report by the European Foundation for the Improvement of Living and Working Conditions suggested that 41 percent of remote employees report higher levels of stress compared with just 25 percent of their counterparts who work in the office.

In Devarajapuram of Pattabiram which is located in Chennai, Mohanavalli (46 years old) is living in the main road street. Her daughter Sanjana (24 Year old) was working in a IT company located in Ambattur. Due to the COVID 19 outbreak, Sanjana was working from home for past 5 months, according to reports.

Unable to bear the workload, Sanjana, few days ago consumed acid which is used to clean toilet. As soon as she went unconscious, family members of Sanjana rescued her and admitted in a hospital. After getting the treatment Sanjana returned to her home. On the night of 10th September, Sanjana’s health condition became worse and her parents admitted her in Rajiv Gandhi government hospital.

Without responding to the treatment, Sanjana died at the hospital. A case was filed and the police officers of Pattabiram are currently investigating. This news created ruckus in the area located in the western part of city Chennai.

Months ago, Vignesh who belongs to Shanmuga Sigamani Nagar in Kovilpatti, Tuticorin died due to similar reason. Vignesh who graduated in Engineering was working in a software company in Chennai. Due to the lockdown announcement, Vignesh went to his hometown from Chennai. He was working from home for his company there. He reportedly said that he did not like his job to his parents before committing suicide. He even had food with his family members on the day before his suicide in a depressed state. (Read : IT Employee Committed Suicide Due To Work Pressure ??)

After finished eating, Vignesh went to his room and hanged himself, said reports. When his parents entered his room, after so many hours of his absence, they came to know that their son hanged himself. Depression due to loneliness in this Corona lockdown and Work pressure are the two major reasons that could have killed Vignesh, media portals presumed.