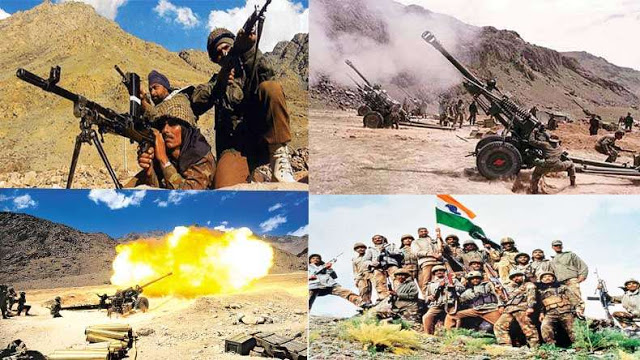 It was the day where Operation Vijaya
was successful and India had won Kargil War on 26 July 1999. It was such a
proud moment for entire country. The braveness of our soldiers held our flag
high.

It was May 1999 and Pakistan troops and Kashmiri Militants
had already entered Kargil district of Jammu and Kashmir and along the side of
Line of Control (LOC). It was the master plan of the then Prime Minister of Pakistan
Pervez Musharaff. He had broken the terms of “Peace Talks” which had taken
place just before few months of this incident. The talk was held between him
and the then Prime Minister of India Shri Vajapayee.
Power packed battle was fought at 18000ft in rocky terrain
under low temperatures. India held ahead five infantry divisions, five
independent brigades and 44 battalions of paramilitary toorps at Kashmir and
later deployed 60 frontline aircrafts. Tiger hill, the highest peak in Drass-
Kargil area was one of the strategic places and focul point during the war.
After the tight war of sixty days, India was able to capture the place and also
pushed Pakistan forces back.  India lost
527 brave soldiers who belonged to Inidan Armed Forces. By all the efforts of
these brave hearts, India won the war and we are living peacefully now.
Some of the heroes we should remember:

Naib Subedar Sanjay Kumar: Param Vir Chakra awardee. He was
a rifleman who volunteered to lead the scout of attacking column tasked to capture
area Flat Top of Point 4875 in the Mushkoh Valley on 4 july 1999. During the attack when enemy automatic fire from one of the sangars posed stiff opposition and stalled the column, Rifleman Sanjay Kumar realizing the gravity of the situation and with utter disregard to his personal safety, charged at the enemy. In the ensuing hand-to-hand combat, he killed three of the intruders and was himself seriously injured. Despite his injuries, he charged onto the second sangar. Taken totally by surprise, the enemy left behind a Universal Machine Gun and started running.

Rifleman Sanjay Kumar picked up the UMG and killed the fleeing enemy. Although bleeding profusely, he refused to be evacuated. The brave action on his part motivated his comrades and they took no notice of the treacherous terrain and charged onto the enemy and wrested the area Flat Top from the hands of the enemy.
Rifleman Sanjay Kumar displayed most conspicuous gallantry, cool courage and devotion to duty of an exceptionally high order in the face of the enemy.

Lieutenant Manoj Kumar Pandey:
He took part in a series of boldly led attacks during Operation Vijay, forcing back the intruders with heavy losses in Batalik including the capture of Jubar Top. On the night of 2/3 July 1999 during the advance to Khalubar as his platoon approached its final objective, it came under heavy and intense enemy fire from the surrounding heights. Lieutenant Pandey was tasked to clear the interfering enemy positions to prevent his battalion from getting day lighted, being in a vulnerable position. He quickly moved his platoon to an advantageous position under intense enemy fire, sent one section to clear the enemy positions from the right and himself proceeded to clear the enemy positions from the left. Fearlessly assaulting the first enemy position, he killed two enemy personnel and destroyed the second position by killing two more. He was injured on the shoulder and legs while clearing the third position. Undaunted and without caring for his grievous injuries, he continued to lead the assault on the fourth position urging his men and destroyed the same with a grenade, even as he got a fatal burst on his forehead. This singular daredevil act of Lieutenant Manoj Kumar Pandey provided the critical firm base for the companies, which finally led to capture of Khalubar. The officer, however, succumbed to his injuries.
Lieutenant Manoj Kumar Pandey, thus, displayed most conspicuous bravery, indomitable courage, outstanding leadership and devotion to duty and made the supreme sacrifice in the highest traditions of the Indian Army.

CAPTAIN VIKRAM BATRA:
13 JAMMU AND KASHMIR RIFLES (IC 57556)
During “Operation Vijay”, on 20 June 1999, Captain Vikram Batra Commander Delta Company was tasked to attack point 5140. he skirted around the feature from the East with his company and maintaining surprise reached within the assaulting distance of the enemy. Reorganising his column, he motivated his men to physically assault the enemy positions. Leading from the front in a daredevil assault, he pounced on the enemy and killed four of them in a hand-to-hand fight. On 7 July 1999, in another operation in the area of Point 4875, his company was tasked to clear a narrow feature with sharp cutting on either side and heavily fortified enemy defences that covered the only approach to it. In a speedy operation, Captain Batra assaulted the enemy positions along narrow ridge and engaged the enemy in a fierce hand-t-hand fight and killed five enemy soldiers at point blank range. Despite sustaining grave injuries, he crawled towards the enemy and hurled grenades clearing the position. With utter disregard to his personal safety leading from the front he rallied his men and pressed on the attack the helped achieve a near impossible military task in the face of heavy enemy fire. The officer, however, succumbed to his injuries. Inspired by his daredevil act, his troops fell upon the enemy with vengeance, annihilated them and captured Point 4875.
Captain Vikram Batra, thus, displayed the most conspicuous bravery and leadership of the highest order in the face of the enemy and made supreme sacrifice in the highest traditions of the India Army.