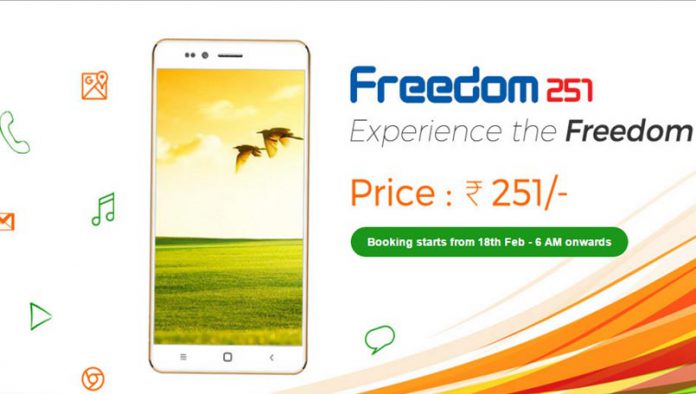 After the first images of the Freedom 251 emerged online, the claims of India’s most affordable smartphone look highly fishy and have already been mired in multiple controversies. The Freedom 251, touted as the India’s most affordable smartphone. Ringing Bells, the company selling the smartphone, is offering the device for just Rs 251. The company has already started taking pre-booking for the smartphone from its website freedom251.com from today morning. The smartphone, however, has already landed in several controversies ahead of the official launch.
The first photos of the smartphone reveal it is a blatant copy of the iPhone. From the hardware design to software interface, it looks like the Freedom 251 is a rip off of the Apple iPhone. Besides the tall claim of an unbelievable Rs 251 price tag for a 3G smartphone, there are plenty of other things about the company and smartphone that make the deal look highly suspicious. If you are planning to buy the Freedom 251, here are four key reasons why you should just hold on your plans.
Controversy 1: iPhone copycat
As we reported in our previous coverage, the Freedom 251 is a blatant copycat of the Apple iPhone. In fact, it has the same circular Touch ID at the bottom of the smartphone like the iPhone 6 or the 6s. In fact, the software icons are lifted from iOS. The dialer app, camera, calculator, clock, browser, and messages are copied from iOS. Interestingly, the smartphone doesn’t look like anything the image posted on the Freedom251.com website.
According to the Hindustan Times, the smartphone is in fact an Adcom branded smartphone. Adcom is a New Delhi-based importer of IT products. A variant of this smartphone is already listed on several e-commerce sites including Amazon, Snapdeal and Shopclues for Rs. 4,000 approximately

Controversy 2: Adcom has no clue
The HT report also points out that Adcom is clueless about its branding used by Ringing Bells. Ringing Bells played down the controversy by saying the units given to journalists were just for the preview. In fact the units given to the HT had whitener applied to hide the Adcom logo on the device.
Controversy 3: Is it Made in India?
We have all the suspicions that the smartphone was even made in India, but is a cheap device with an ultra low cost price gimmick. According to Livemint, the price of the smartphone outdoes the cost of manufacturing. For an example a 4-inch display assembly (having LCD, digitizer, and front bezel) would cost more than $35, which is Rs 2,400 approximately.
Controversy 4: Is it a scam?
We all have been burnt by the experience of the ultra low-cost Aakash tablet. DataWind had failed to timely deliver the Aakash Tablet, and couldn’t cope up with the massive demand nationwide. It somehow reminds us of the same experience, and perhaps the pricing has been kept low to just boost branding of the company, and later delay the shipments for months citing massive orders/demands. Obviously, there will be a massive demand for a phone under Rs 300 in India, where usual smartphones start at Rs 4,000 approximately.
In fact, the Indian Cellular Association has said the minimum price for 3G phone is Rs 2,700 and that it is impossible phone to offer phone at Rs 251. The industry body says the company claims are not sustainable.