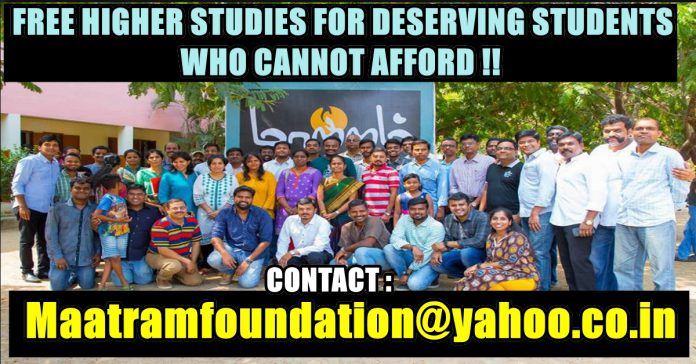 This group in Tamil Nadu has helped over 500 students from underprivileged backgrounds gain admission in colleges – without them having to spend a single rupee. Here’s how.

Two walls and a tarpaulin sheet to substitute for a roof – this is what Sujith Kumar saw when he went to Ajith’s house, a Class 12 student who wants to become an engineer. Sujith is the founder of a Chennai-based NGO called Maatram Foundation, which provides free higher education to students from economically weak backgrounds.

Ajith, who belongs to a remote Tamil Nadu village, had scored 1126 out of 1200 marks in his board exams. With this score, he could have gained admission in any engineering college of his choice. But it was difficult for him to afford even the counselling fee of Rs. 5,000. So he took up a job at a vehicle shop instead and cycled 54 km to and from work every day…until he met 39-year-old Sujith. “Ajith told me that he wants to become a civil engineer because his biggest dream is to build a house for his parents,” says Sujith. Today, thanks to him, Ajith is in his third year of engineering, does not have to worry about his fees, and is one step closer to his goal.

Sujith, an HR professional from Chennai, started Maatram Foundation in 2013 after an incident that he refers to as a “coincidence.”

It happened during one of the 10-day long counselling sessions he conducts in April every year for students in rural Tamil Nadu. He goes to different parts of the state to make students aware of their career options.

During one such session, he met a young girl whose circumstances shocked him. “Can you recommend a course after which I will get a job for sure?” she asked Sujith. Her intention was just to earn. Any course, she said, would be fine. She had just taken her board exams. Her father was an alcoholic and she had lost her mother when she was in Class 7. She was working as a domestic help in four houses to support her education and the education of two siblings. “Her story was like a big slap on my face. Usually, when people come and ask you for help, the first thing you do is give some money. But I realised that giving money to this kid was not going to help her. So I asked her to call me after her results. She did, and she had scored 1152 out of 1200,” remembers Sujith.

He then called the chairman of a college who he knew personally, told him about the girl and asked if he could help her get a free engineering seat. In return for this seat, Sujith would provide free placement training to final year students of that college. The chairman was so inspired that he agreed to give 20 free seats for underprivileged students.

And so, this is how Maatram Foundation was born. Sujith contacted Balaji Patturaj, a radio jockey, comedian, and actor who is also known as RJ Balaji. Together, they started a radio show and invited students from weaker economic backgrounds looking for college admissions to get in touch with them. The number of seats they could offer also began to grow. “To date, we have not approached any colleges for seats. They approach us and we run promotions around the time of admission. We have admitted 327 students in different colleges in engineering, arts and science streams. This year we helped with about 125 admissions,” says Sujith. These include Sathyabama University, Chennai Institute of Technology, Dr. MGR Janaki Arts & Science College, Peri Institute of Technology, etc. Maatram Foundation gives first preference to orphan children, then to students with single parents, and then others from underprivileged backgrounds. The driving criterion is that the applicants should be from economically backward sections of society. The organization conducts telephonic interviews with the applicants, followed by home visits to verify their financial status. Then they call the students for interviews and shortlist them. Seventy five percent of the students are first generation college-goers. They are also trained in employability skills to ensure they get jobs.

The core team of Maatram has 11 members. All of them have fulltime day jobs. They also have a team of 10 advisors who are eminent academicians and school principals, and over 200 volunteers who help with the verification process. Sujith is the local guardian for orphan children who study in Chennai. They come to his home during weekends or when the hostels close. The identity of the students is always protected.

From the many stories of change, Sujith narrates one that is not related to college admissions but is from a time when Maatram had an impact on four lives in 15 days. One of the Foundation’s volunteers saw a visually impaired woman named K. Sugna selling candies at a railway station. He clicked her picture and asked Sujith if they could help. Sujith immediately noticed the woman’s daughter who was sitting at her feet and reading.

She was a graduate in Tamil and had a B.Ed with teacher training. But she hadn’t been able to get a job because of her disability. So she decided sell candies for four hours each day. Sujith gave her Rs. 10,000 to help her for a month, requested her to stop going to the station, and posted about her on Facebook. The post went viral in a few hours and people from across the country contributed money for her. In the meantime, Sujith took her to Mahindra World School in Chennai, requesting the principal to evaluate her.

“Three people interviewed Sugna and she was brimming with confidence. When the principal asked her how she would learn English, she said that her mother tongue was Saurashtrian and yet she chose to study Tamil literature. English is also just a language and she would learn it in a few months. The principal was so impressed that she immediately gave her a job as a Tamil teacher,” says Sujith. Today, Sugna earns Rs. 20,000 per month and her kids are studying in the same school. Maatram Foundation is registered under the Tamil Nadu NGO Act and the team accepts money from donors on an as needed basis.

The Foundation also works on Santa Kids – a project under which children from different schools in Chennai fulfil wishes of underprivileged children by becoming their Santas.

The Foundation has also set up a library for the Chennai Primary School in Taramani with the help of funds and books received from donors. It plans to set up many such libraries in low-income schools in the city.

Sujith is also interested in public speaking and conducts lectures in different colleges, schools, and offices.

“People say you need money to help someone. We say you just need the intent. We believe in the power of networking. There are educational institutions that are willing to offer free seats, and there are students who need them. We are just bridging that gap,” he concludes.

“We received over 600 applications and we narrowed it down to 150 (who were called for interview). We had some walk-ins too,” said Punitha Anthony, one of the core members of the Maatram Foundation. She added, “This year, we received applications from all districts in Tamil Nadu, including places like Cuddalore, Salem, Tiruvarur. Deserving candidates are filtered out and in the second phase we do a physical verification. In the final round, the student is called for an interview.” Udaya Shankar V, co-founder, Maatram Foundation, said,“We are scouting for more students with good marks who require financial support. We request more people to spread the word and help underprivileged kids get access to education. We prefer orphan children who are keen to study. The second phase of admissions will happen in the middle of this month.”

“Since most of us are from HR and have good connect with the industries, we ensure that all our students go through strong employability training,” said Mr. Udaya. The one thing the foundation expects from its students is help another student get access to good education. The Maatram Foundation, a voluntary organisation, has so far helped over 450 students from underprivileged background to get access to quality education.

The foundation has tied up with over 20 colleges.

If you find deserving students who could not make it to their higher studies because of poverty please do drop a mail at :

Source : The Hindu & The Better India 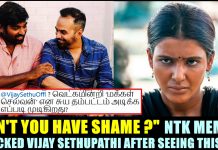