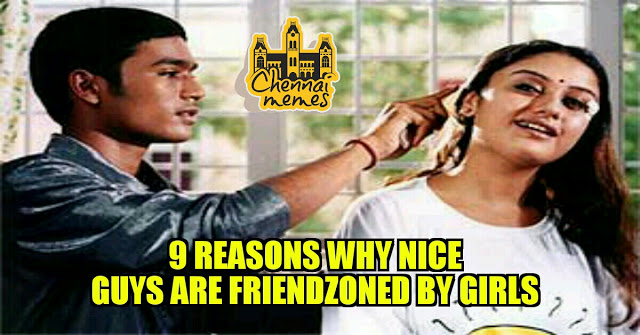 Why is it that girls always choose the douchebag over the good guy? And you cannot really blame her. When you choose to be the nice guy, you assume the first spot in that dreaded friendzone. Dear nice guys, here’s what you may be doing wrong!
1. You’re a little too available—to the extent that she probably doesn’t even appreciate it anymore. There’s absolutely no chase involved, and that is exactly why she takes you for granted. 2. Being someone’s confidante is one thing, but becoming a part of her girl gang is another. You’re probably wasting time discussing every tiny issue in her life, lending ears to her useless rants when you really should be stepping up and doing something about your feelings. 3. You try too hard to please her. Your life revolves around her approval. If you agree with her on every damn thing just for the sake of it, do whatever she asks you to, you’ve literally signed up to be her doormat for the rest of your life. In your efforts to please her, you’re only showing that you lack a strong personality. Can’t really blame her for thinking of you as a man of no opinions, can you? 4. If you think being unnecessarily nice to her is going to earn you brownie points, you’re badly mistaken. She’d rather be with someone who doesn’t live to impress her or seek her attention. Remember that she doesn’t necessarily want you to be ‘nice’, that’s just what you think works. Be more than a kind person! 5. You give her way too much benefit of doubt. Once she knows you’re totally okay with her being unreasonable, she will start taking advantage of it. That’s natural human tendency. 6. You’re probably too afraid to make a move and quite honestly, nobody likes cowards! No girl wants to date a guy who cannot even speak his mind. And trust us, if you do not make the right move at the right time, it all fizzles out for the girl. 7. The ‘nice guys’ have this annoying habit of giving unsolicited advice, reminding people what’s wrong and what’s right and frankly, a mother is the last thing girls search for in partners. Nobody appreciates moral lectures, to be honest. 8. You get friendzoned because you let girls friendzone you – as simple as that. There’s a difference between being nice and being spineless. If you never object to being put into the friendzone, you’re probably never getting out of it. 9. And here we come to the last and the most important reason why nice guys get friendzoned – because they choose to be boring! You heard that right. Nice guys are never as exciting as other men. Under the constant pressure of earning the label of a ‘nice guy’ they stop being fun! Every girl looks for excitement, thrill and adventure out of a relationship and the nice guy is just the opposite of that. Nobody needs a person who reminds them of their boring, mundane lives!