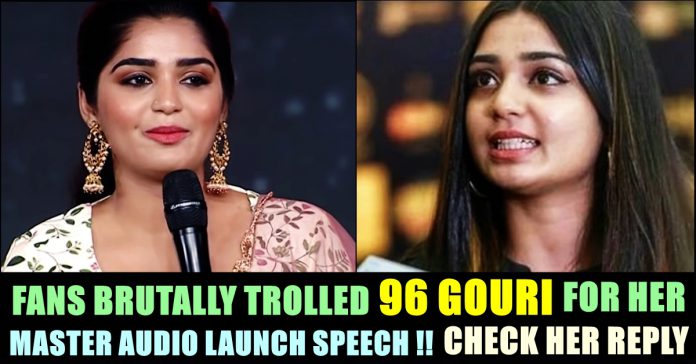 Gowri G Kishan who rose to fame among Tamil audience for her role in 96 as Junior Jaanu, acted in the most expected film of the year “Master” as student and attended the audio launch which took place on Sunday evening. Being a Kerala based model and actress, Gouri won the hearts of tamil fans within a short span. In the audio launch of Master, she thanked Lokesh Kanagaraj for giving her the opportunity.

“I am so overwhelmed for being a part of such a huge film. After playing “Jaanu”, I got this opportunity of acting in “Master”. I learnt several things from this from the experience “Master” gave me. I consider this as one the biggest moments in my life.” Jaanu said during her speech.

However, the part which grabbed the attention of Netizens is when Gouri slipped her tongue by saying Shanthanu “mam” while thanking her co-stars. “My co actors, Malavika Mam, Shanthanu Mam” said which made director Lokesh Kanagaraj and Malavika Mohanan to laugh out loud. Watch the video below :

On seeing Gouri making a blunder, Netizens started reacting to it in hilarious ways. Few made memes to troll Gouri as well. Check out some of them below :

Gouri : I would like to Thank My Co Actors Malavika Mam & Shanthanu mam ..
😂 pic.twitter.com/5GS43tdsh7

Gouri who saw all these memes and trolls reacted to them in a way of silencing them. In her Instagram story, Gouri wrote “2 seconds before calling Shanathanu anna “Mam” Damn sorry na, but calm down guys, it was a slip of a tongue”

The film is slated to release during the April month and Gouri is expected to appear as student. Netizens also speculated that she is going to portray the role of Anitha who killed herself due to NEET exam. Vijay is playing the role of a professor. Comment your views on these reactions and Gouri’s reply to it !!