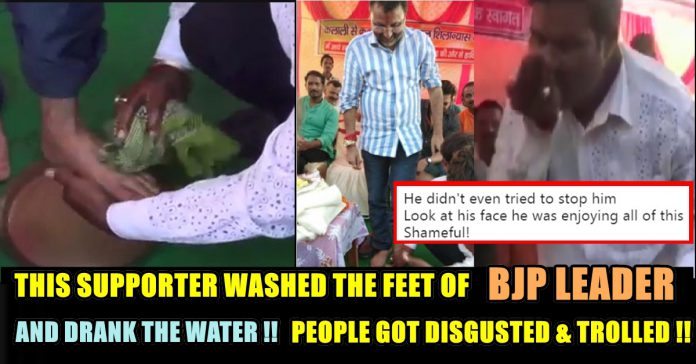 The political environment in the country is getting pretty intense ahead of 2019 elections. BJP workers, fans and leaders are leaving no stone unturned to tell people that it’s the best party in the country right now and deserves to be re-elected.

BJP MP Nishikant Dubey was recently in Godda, Jharkhand to make the announcement of a bridge. But something happened there which is getting all the negative publicity for the MP.

A video has gone viral on the social media which shows a party worker washing the feet of Nishikant and then drinking the soiled water. The party worker named Pavan is seen approaching the MP to keep his feet in the brass plate. After the MP does it, he washes his feet and then drinks the water proudly. Watch the video-

Check out the trolled made by the people :

He is an adult!
No one has any right to give him pravachans..
…a party selling a country is fine?
…an innocent rocket scientist jailed and his reputation tarnished by a party is fine?
…married alu found with married malu in a resort is fine?
..Raping Sukanya is fine?

That is one of the most disgusting thing I saw recently. what a shame.

BJP worker washing feet of his party MP is sycophancy of the worst order, disgusting servile mentality. Top brass of the party must take cognisance and take action against both, worker & the MP to send right message to the public. Sense of equality and respect for all necessary

This is the shameful mentality of BJP leaders !!

He didn’t even tried to stop him
Look at his face he was enjoying all of this
Shameful!

Seriously that man and MP needs to relearn humanity and ethics

How low will they stoop??

Disgusting, but not sure what makes people to vote for particular person, maybe fear in some cases.

Good Lick for the future Bhakts 😅

Now this is ridiculous and disgusting. There are better ways to pay respect and honour a person.

After 2014 victory someone from ruling group said we got our own government after 800 yrs. It’s hidden implication was “we r taking u back in -800yrs era”.

Is that man still alive?😨

It is sad that the BJP worker drank something that was not fit for drinking. Wonder what example it sets during the period when the country is celebrating Swachchata Fortnight in the wake of the clarion call by Hon’ble PM. @narendramodi @BJP4India

What do you think on this pathetic gesture ?? Comment below !!