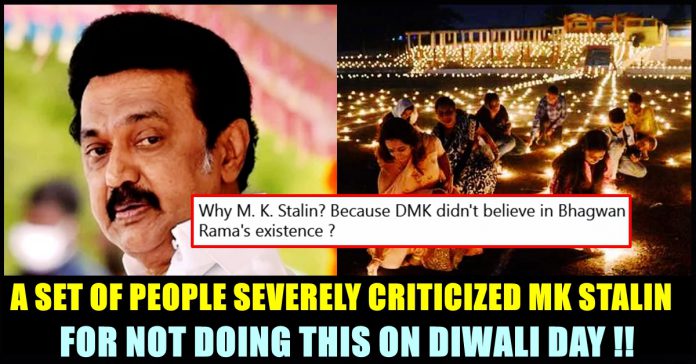 A group of online users which includes actress Kasthuri, Political analyst Sumanth Raman, expressed their displeasure over Chief minister MK Stalin for not wishing Tamil nadu people for the “Diwali” festival on the special day. Sumanth Raman said that world leaders including America’s president Joe Biden, Pakistan prime minister Imran Khan and many others posted their Diwali wishes in their respective social media accounts and questioned the DMK leader who recently became the Chief minister of Tamil nadu for the first time.

Diwali is observed on the 15th day of Kartik, the holiest month in the Hindu lunar calendar and it is believed that on this day Lord Rama returned from a 14 year long exile during which he fought and won battle against the demon king Ravan. The festival which is celebrated all over the country, is recognised as the festival of lights. It symbolizes the spiritual victory of light over darkness.

DMK leader MK Stalin who hails from a family that strongly believes in the ideologies “Atheism”, recently became the chief minister of state Tamil nadu by winning the assembly elections. On seeing him not uploading a tweet wishing people for “Diwali” festival, political analyst Sumanth Raman said that Stalin should have personal likes and dislikes as a party leader but he should be inclusive as a chief minister.

“A CM not greeting people on one of the two most celebrated festivals of the State,one celebrated by the majority of people in Tamil Nadu only shows that this is not an inclusive Govt. A party leader can be as he likes. A CM has to be inclusive” he said through one of the tweets he posted.

Here’s the series of tweets he posted :

Trolls can say what they like and so can DMK IT cell but not greeting people on #Deepavali esp when he greets people on religious festivals of other faiths is wrong.A CM should not be seen to put some religions above others.Not in a secular country.

He also quoted the tweet of America’s president Joe biden and made a statement to the supporters of DMK and shared the Diwali wishes tweets of Novak Djokovic and Mahindra Rajapaksa.

Joe Biden, Boris Johnson and many other world leaders have extended #Deepavali greetings. Not just Imran Khan. DMK trolls, maybe you can suggest that I go to USA or UK instead of Pakistan. 😀 https://t.co/Qt9x9CkrRV

Actress Kasthuri criticized Mk Stalin saying that he doesn’t have the heart to wish for “Diwali” when a twitter user said that he is busy doing his job.

“You have to understand our CM’s generosity brother. So many national and international leaders are there to wish us and promote Hindu culture. So he is concentrating on events that need help- like few other religion festivals, Tamil movies etc” she replied to another twitter user.

You have to understand our CM's generosity brother. So many national and international leaders are there to wish us and promote Hindu culture. So he is concentrating on events that need help- like few other religion festivals, Tamil movies etc. 🤡 https://t.co/GFWuuRuAjM

Check out some of the other tweets that surfaced criticizing MK Stalin for not wishing on “Diwali” day :

Even Imran Khan wished for Diwali, except our CM Mr.Stalin.

I waited all day long hoping a Diwali greet from @mkstalin but didn't find one.

Whereas most of all the World and Indian leaders greeted #Diwali.

Wishing for Ramzan & not for Diwali is called selective rationalism. Being a rationalist ,ashamed on voting DMK for not been a inclusive govt to everyone. It will definitely touch many peoples sentiments & its a tool for BJP to destroy Stalin sir & DMK…

Comment your views on these reactions that surfaced criticizing Chief minister MK Stalin who didn’t posted a tweet wishing for Diwali.