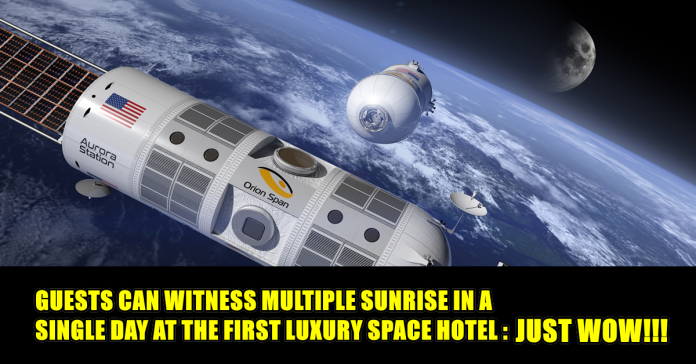 Adventurers pay $9.5 million per person — or about $791,666 a night — and their $80,000 deposit can already be reserved online, company officials said. But don’t fear: The deposit is fully refundable. Orion Span says it plans to launch the initial Aurora Station module into a low-Earth orbit, at an altitude of 200 miles (322 km), in 2021. This orbital altitude is slightly lower than the current positioning of the ISS, which is about 254 mi (408 km) above the Earth. The company says the module will boast the most windows of any spacecraft put into orbit, with people staying in private two-person suites on a 12-day round trip, with a three-month training program to get them astronaut-ready before the adventure commences.

In a press release, Orion Span said it would take “what was historically a 24-month training regimen to prepare travelers to visit a space station and streamline it to three months, at a fraction of the cost”. The company said travellers would then “enjoy the exhilaration of zero gravity … gaze at the northern and southern aurora through the many windows, soar over their hometowns, take part in research experiments such as growing food while in orbit (which they can take home with them as the ultimate souvenir), revel in a virtual reality experience on the holodeck, and stay in touch or live stream with their loved ones back home via high-speed wireless internet access.”

They would also, it said, “be treated to a hero’s welcome home”. Guests at Aurora Station, the proposed world’s first luxury space hotel, will witness 16 sunrises and 16 sunsets in 24 hours as the hotel will orbit the earth every 90 minutes. Guests can also participate in research experiments like growing food in orbit.

The hotel will be able to host four travelers at a time, plus two crew members guiding the journey. At a cost of US$9.5 million per person this is certainly not a budget holiday, despite Bunger’s recent suggestion that, “Our goal is to make space accessible to all, by continuing to drive greater value at lower cost.”

Bunger notes that the longer-term plan for the company is to expand Aurora Station from just one module to many, with a variety of potential uses.

“Our architecture is such that we can easily add capacity, enabling us to grow with market demand like a city growing skyward on Earth,” he says. “We will later sell dedicated modules as the world’s first condominiums in space. Future Aurora owners can live in, visit, or sublease their space condo.”