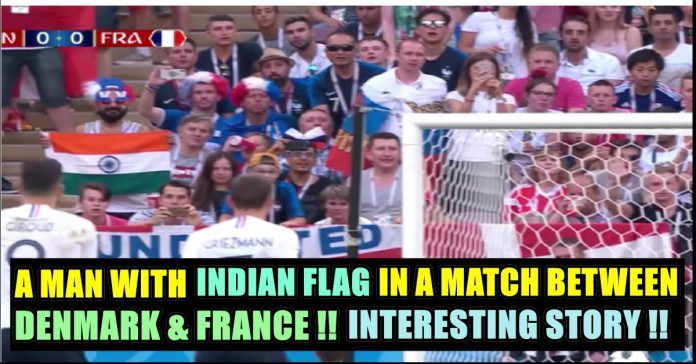 Germany just crashed out of the World Cup after being defeated by South Korea, leaving us Indians shell-shocked yet, so, so excited about what’s in store in the upcoming matches.

Yep, Indians. We are an excitable bunch when it comes to football even though our country doesn’t play in the World Cup. And we are making sure our presence is felt in this glorious spectacle of football in all sorts of ways. There seems to be this one particular man who managed to take it too far.

A Reddit user posted a picture in which there seems to be an evidently Indian man hoisting the Indian flag while watching a game of Denmark and France.

Yep, he has traveled all the way to Moscow to watch the World Cup. And he has carried the Indian flag with him. After a bit of research, we found out who the man is.

The man in the photograph is Cliffin Francis from Kerela who decided that he has to go to Russia against all odds for the World Cup. If you’re thinking that’s it. then wait for it.

When Francis, a freelance math teacher, realised that he doesn’t have enough money to finance his trip, he decided to cycle from India to Russia. Let that sink in.

“I asked myself – what could be the cheapest way of travelling? Bicycle was the answer,” he told BBC in an interview.

With that, Francis embarked on his adventure, traversing the depths of oceans and summit the heights of mountains to finally make his way to Russia. Even though Francis could not fulfil his ultimate dream of meeting Messi, and had to settle a Denmark vs France match he made sure that he makes the most of it.

More importantly, Kudos to his spirit and willpower for literally just picking up his cycle and darting off to chase his dreams.