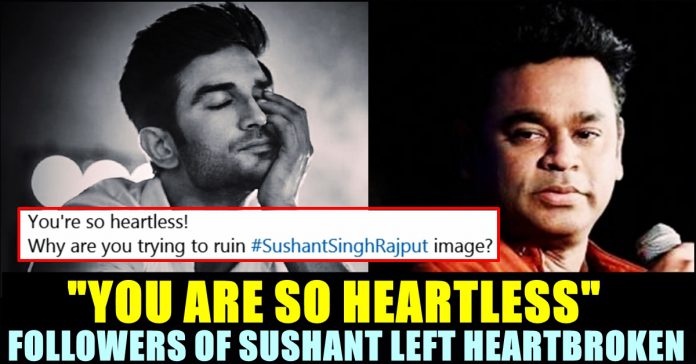 Sushant Singh Rajput’s final movie “Dil Bechara”, remake hollywood epic love tale “Fault in our stars”, is all set to be released in online platform. Since his demise of the youngster, fans and followers of him were expecting the film to get released in big screens once the COVID 19 pandemic is over. This announcement of “Dil Bechara” getting released in Disney plus Hotstar from July 24 has left the fans in a disappointed state.

Academy award winning Tamil nadu based musician A.R Rahman has composed music for the film and he made the announcement about the digital release of the film through his official twitter account. “Celebrating the late #SushantSinghRajput’s legacy that will be etched in the minds of all and cherished forever. Dil Bechara coming to everyone on Disney hotstar plus on July 24.” the musician wrote in his tweet.

Though A.R Rahman is not responsible for the film’s release arrangements, many of his followers and twitter users started expressing their disappointment over the post of him in the comment section of it. Few even tagged the official twitter account of Disney hotstar plus and made their demand. “You are heartless… Release on Big Screen, Last movie of Great Actor” wrote one of a twitter user whereas another one wrote “You all are big cheaters .. its already heartbreaking why are you doing like this . . Will never ever forgive you guys . .”. The film was produced by Fox star studios and it marks the directorial debut of Mukesh Chhabra.

You are heartless…
Reales on Big Screen, Last movie of Great Actor#SushanthSinghRajput #DilBechara

You all are big cheaters .. its already heartbreaking why are you doing like this . . Will never ever forgive you guys . .

Shame on you All 😡😡😡 #dilbecharaonbigscreen

Not even 25% of his fandom would have a subscription for DisneyPlusHs. Releasing it there, is it stupid move or a smart move? 🙃
I guess it is the latter. 🙂

#dilbecharaonbigscreens shame on you @DisneyplusHSP & @foxstarhindi
You’re so heartless!
Why are you trying to ruin #SushantSinghRajput image? It’s his only last film!Audience won’t get to see him on big screen again! If Bollywood biggies can wait,so can we wait for #DilBechara

And now I’m officially heart broken.. we wanted just a single wish.. to see him in the theatres for the last time.. but no.. have they ever thought maybe there are many who wanted to give him the final send-off.. wanted to see him smiling, laughing with that carefree look.. but..

Dil Bechara was supposed to release in theatres on May 8 but got postponed due to COVID 19 pandemic. Unfortunately, the actor committed suicide on 14th of June in his apartment in Bandra. Police investigation is on and public people are blaming the existence of Nepotism in Bollywood industry for the demise of Sushant Singh rajput. It is highly believed that the actor killed himself due to depression.

Comment your views on Dil Bechara releasing in OTT !!