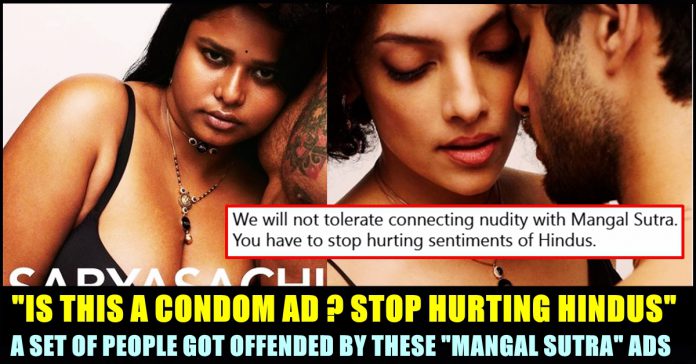 After the pictures of designer Sabyasachi Mukherjee’s new jewellery advertisement campaign went viral on Wednesday, a set of social media users expressed their displeasure over it and started trolling the designer and his idea of campaign. The official Instagram page of Sabyasachi released a series of pictures featuring models flaunting the brand’s newly launched mangalsutras. The designer’s new collection is titled “Intimate Fine Jewellery”.

The advertisements contained heterosexual and same sex couples posing for pictures wearing The Royal Bengal Mangalsutra which is a part of the designer’s intimate jewellery collection. These series of pictures also includes models posing in intimate apparel wearing a Mangal sutra. Check out some of the posters made for the campaign :

Some of these posts didn’t go well with a section of online users who call it as “obscene”. Several users took to twitter claiming that the advertisement campaign is an attack on Hindu culture and hurts religious sentiments while expressing their dissatisfaction. To troll the campaign, few even said that they first thought it as an advertisement for lingerie.

Some went on to demand the designer to delete his ads and seek and apology with many terming the ads as “distasteful”. “So #Sabyasachi has not deleted this obscene content till now. We will not tolerate connecting nudity with Mangal Sutra. You have to stop hurting sentiments of Hindus.” a social media user wrote to express her disagreement with the ad whereas another one said “Boycotting Sabyasachi brands and cloths forever….. Will continue to do so for rest of my life… Promise…!!”

Check out some of such comments below :

I thought Sabyasachi launched his new lingerie collection, no no..that's a mangalsutra ad.
I'm so regressive, I didn't notice. 😊 pic.twitter.com/ieRY4rrvcr

So #Sabyasachi has not deleted this obscene content till now.

We will not tolerate connecting nudity with Mangal Sutra. You have to stop hurting sentiments of Hindus.

No! This is no lingerie or Condom Ad.

This is Sabyasachi Mangalsutra Ad.

Ultra Woke #Sabyasachi is so creatively bankrupt that he had to use semi naked models for a Mangalsutra ad. pic.twitter.com/TZhT5XtGz5

No other way to show the jewellery ? This is just distasteful ! #Sabyasachi pic.twitter.com/nxS1zCCpmb

It's not a random piece of fashion jewellery, it indicates the love and commitment the husband and wife have towards each other. pic.twitter.com/HB3r4Aa4A4

Only thing you can do about this ‘ad’ is to report it for ‘nudity and sexual activity’. The minute you make any comment about the model, Sabyasachi flashes the platinum victim card and cries ‘body shaming’ ‘racism’, ‘why Indians hate dusky skin’ etc etc. Do NOT fall in the trap! pic.twitter.com/wa77Lo9m6n

I think #Sabyasachi got the vowels wrong. He was promoting the "MingleSutra", not the "MangalSutra."

Boycotting Sabyasachi brands and cloths forever….. Will continue to do so for rest of my life… Promise…!!

#Sabyasachi strange that u have to show a mangalsutra in wt looks like a vulgar,porno pic? U usually use Milky white Kareena for ur designerwear on the ramps, why for this a #duskydame? Any mssg, a mangalsutra is sacred, & u want to mock it,ask #KareenaKhan or #AliaButt to don it pic.twitter.com/pvSWOrDf6r

Mangalsutra is a pious thread. It signifies the sacred union of marriage. U can do advertisement in this way,it looks really beautiful (pic-1) not in this vulgar way (pic-2). Why intolerant ones are jumping for boycott? No need tho. Dlt that ad and apologize. Enough! #Sabyasachi pic.twitter.com/m6akHGarNO

Boycotting #Sabyasachi won't help. Infact, it is way too expensive & not many can afford it.

He shd be slapped with multiple cases for hurting Religious Sentiments.

His life can be made a miserable Hell.

#StopExploitingHinduWomen #Sabyasachi#BoycottSabyasachi
Stop showing us how a woman looks before and after SEX#Mangalsutra & Kamasutra both are different
Mangalsutra is related to religious things & worn only after marriage
While Kamasutra is just about Sex and lust a being has pic.twitter.com/JRPQGIwRs1

No other way to show 'Mangalsutra' ?

What are u actually selling #Sabyasachi ?

What the hell is "Intimate fine jwellary "??

We should CLEARLY state the fact : THIS IS HURTING HINDU SENTIMENTS & WE WILL NOT TOLERATE THIS ! 😡#BoycottSabyasachi pic.twitter.com/y3oRkuwzBt

Overrated & overpriced designer,Sabyasachi,has come out with this ad..it is NOT for Undergarments or Condoms,it is for #Mangalsutra
Mangalsutra(Mangal=AuspiciousSutra=Thread),a man ties his bride,to signify sacred union. An imp aspect of our tradition has been reduced to this 👇🏼 pic.twitter.com/cNAQupZnvQ

This is embarrassing. When I saw the picture I thought it was about lingerie but it is disgusting that this is a mangalsutra ad. #Sabyasachi is playing with the sentiments of Indian women. https://t.co/j7a0uPxhZm

Comment your views on how the ads are made and the reactions they are receiving !!