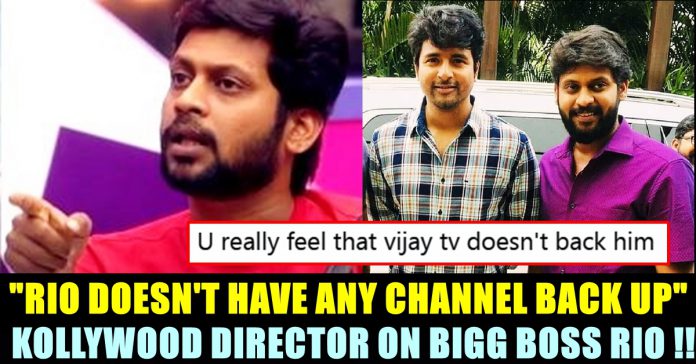 Rio raj who started his career in media industry as an anchor, debuted as a protagonist in a Tamil film named “Nenjamundu Nermayundu Odu Raja”. The film was produced by actor Sivakarthikeyan under his own banner. As his second film “Plan Panni Pannanum” is awaiting for theatrical release, Rio entered Bigg Boss house as a contestant. The reality game show which is being hosted by “Ulaganaayagan Kamal Haasan”, had himself and 14 other celebrities as contestants. The show is nearing its end and Rio became one of strong contender for the title.

Rio is facing both love and hatred from the followers of the 100 days show. Now, director Badri Venkatesh who is known for directing actor Atharvaa in films such as “Baana Kaathadi” and “Semma Bodha Aagathey”, came up with a social media post appreciating Rio for working hard to carve a place for himself without any background.

Badri said Rio came from a humble background from Erode and struggled to carve a place for himself. The filmmaker said that the former TV host doesn’t have any godfather to back him up. He also said that no channel is backing him up and added that Rio’s victory is a victory of a common man. He also believed that Rio represents everyone who struggle.

“A simple guy from an humble background all the way from Erode, struggled and still struggling to carve a place for himself. He doesn’t have any godfather nor any channel back him up. Rio Raj’s victory is your victory and mine. He represents everyone who struggle. #Iloverio” Badri wrote in his post before adding “Let’s shun negativity. Live and let live“

A simple guy from an humble background all the way from Erode, struggled and still struggling to carve a place for himself. He doesn't have any godfather nor any channel back him up. @rio_raj 's victory is your victory and mine. He represents everyone who struggle. #Iloverio pic.twitter.com/VTn7p9klnO

Badri also replied to a number of followers who raised question against his tweet. Check out them below :

Ofcourse not. #planpannipannanum is not dependent on him alone. Game is a game. Let the best win. I strongly believe in collective wisdom. Only point is shun negativity in social media. Tom we need to see our post's again with pride and not deleting it.

What ever little I know. I have been a part of many shows in many channels. Generally the channel does nothing to spoil theIr reputation. As a professional I know everyone always play to the gallery. Rio represents you and me .Let's shun negativity on social media. ILOVERIO

Badri’s next project in Tamil film industry is “Plan Panni Pannanum” which has Rio raj and Ramya Nambeesan in the lead roles. The film also has Yuvan Shankar Raja as the music composer. The film crew, recently released a single of their film in the Bigg Boss house in front of the contestants.

After seeing the single, Balaji Murugadoss, a contestant who disrespected Rio in previous episodes, apologized to him saying that the song made him realize how experienced Rio is. “I am someone who wants to reach those heights. But now, after seeing the single, it feels like I pulled the legs of Rio anna and Aari anna. I feel sorry for that” he said in the episode.