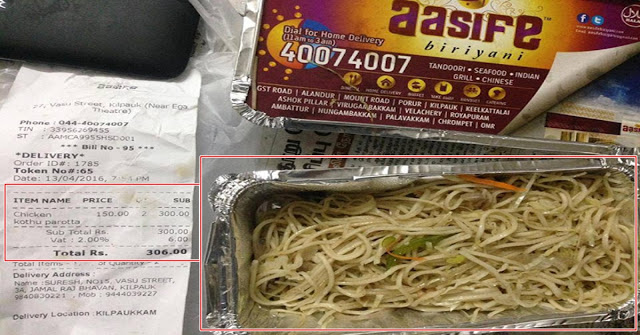 Gone are the
days when customers were treated as GOD for any retailer. The efforts taken to
satisfy the customer or make them feel contented with what they receive have
become a myth I suppose. Not all is to blame here, but definitely a hand full
of lot who don’t give a damn about the customer quotient anymore.

Remember the
‘banana’ joke by our very own Goundamani and Senthil? This case happens to be similar with that one! When the
customer had ordered one dish but received another. And when asked about it,
was replied with an answer similar to “athu dan annae idhu“.
So coming to
the issue at hand, a customer from Kilpauk had placed an order from Aasife Biryani for two plates of chicken kothu parotta. And when the
order was delivered and opened by the customer, there was ta-da.. PLAIN NOODLES!!
Overcoming  the shock and disappointment, he called the
restaurant’s customer care to complain. But as I told you before, there being
no concern whatsoever for customer satisfaction, the guy who answered the phone
told the him to adjust and eat whatever they had delivered.

Not only
being careless on their part of delivering the wrong food, they also had the audacity
to give such an answer to the customer. And with no word of apologies for all
the ruckus caused.
Surely, this
is not the way to address a customer. This might definitely make many people skeptical about ordering food online or paying for it before checking what they have received.
We only hope
that the concerned people take a note of this and see to it that such acts
don’t get repeated again. Or am sorry bro! You might land up in a few losses of
valuable customers soon!