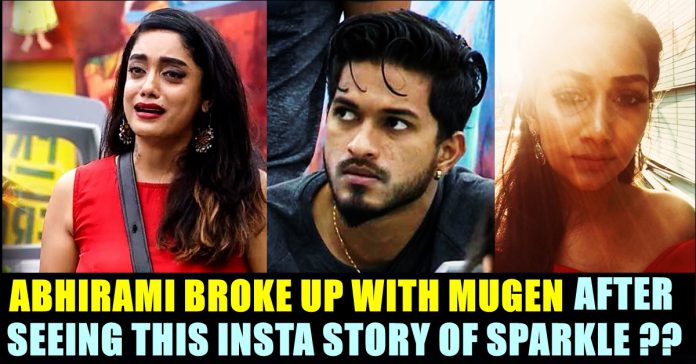 Since getting evicted from Bigg Boss house, Abhirami Venkatachalam is very much active on social media platforms, especially on Instagram. She keeps meeting her co-contestants from day 1 of her eviction. Initially she met Mohan Vaithya and Fathima Babu who are contestants got eliminated in the within three weeks. She met her dear friend Sakshi Agarwal and posted selfies of it. She even met the family members of the contestants who are playing the game.

Abhirami was initially criticized by the audience for confessing that she is in love with Kavin on the first day of the show. She also faced the wrath of social media which alleged that she is twisting Mugen rao and distracting him from playing the game. But now after her eviction, many fan pages started emerging and they are pouring love on her constantly which is evident through her Instagram stories.

She fell in love with Mugen Rao and expressed it to him and everyone in and outside the Bigg Boss house. Even after her eviction she kept sharing pictures of him and adored him for his natural behaviour. She even met his family and spent some valuable time with them.

The best ever in the house… true soul.. game on babe rock the show … it's freeze today … can't wait to see their moment … en support eppavumey unakuthan da… my superhero …. 🦋🔱

Proud of you da… let god give you all success … 🦋

Already missing you both ♥️🦋 can't wait for finale 🔱

However, Mugen Rao has already said to Abhirami and to everyone that he is interested in a girl named as “Sparkle”. Yesterday, Yasmin Nadiah alice Sparkle has posted a story in her Instagram account which had Mugen Rao singing a beautiful song.

Check out her stories here :

Now to our shock, Abhirami has posted a Instagram saying that she doesn’t want to talk anything about Bigg Boss. “People stop asking BB# questions I have moved on I would appreciate if you all leave me to move on . . Please , I am focusing in my work and shoots I am happy and I really dont want anymore BB related stuff” she wrote in her Instagram.

This story indeed raised question on the BB viewers who are following Abhirami. They believe that Abhirami’s story is an effect of Yasmin’s Instagram story.

Abhi akka all these days was chill with her train rally on her IG story but after Mugen's girl put a story, AbhiAkka ends up saying stop asking me BBTS3 related questions, she's trying to overcome that seems then why tf you went inside at the first place?#BiggBossTamil3 pic.twitter.com/KQKiqy2i5p