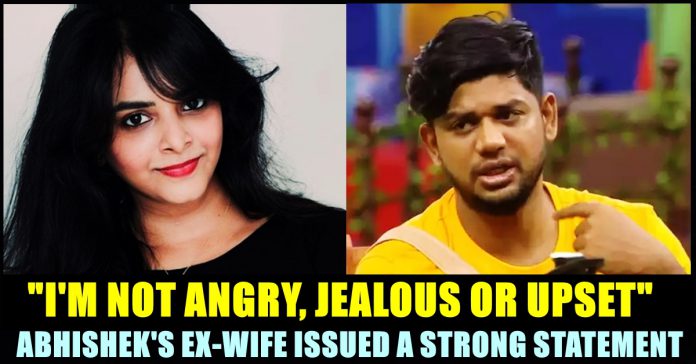 Deepa Natarajan, former wife of movie reviewer Abhishek Raaja came up with a strong statement demanding a private youtube channel to remove the video of an interview she gave with the latter, months after her marriage. She who says that she tried all the ways to get the video removed, sought the help of her Instagram followers to take the video down. She wanted her followers to report the particular youtube video, in order to get it removed.

Abishek Raaja and Deepa Natarajan got married in the year 2017 and got divorced three years later. Now, as the movie reviewer entered the Bigg Boss house as one of the contestants, Deepa came up with a post in her Instagram account, asking youtube channel “Talks of media” to remove a video interview of herself and Abhishek. In the show, while introducing himself, Abhishek said that he is a divorcee.

Now, Deepa came up with a couple of Instagram posts, asking her followers to report the video. Deepa said that certain memories can literally just spoil her entire day or week. “This post is about a YouTube channel called Talks of cinema” (tagging, them below) who interviewed me and my (then/ex) husband, immediately after our union. And it is basic for me or him after our separation to expect them to take the video down as it’s our privacy.” her tweet read.

“I do not know if the other person also needs the same, but at least I assume they also wouldn’t prefer for it to be there as we are not even a thing right now and it was a mutual decision. Since 2 plus years I have been trying to reach out to Mr. Hemanth from this channel and these were the series of instances that happened” her post read.

“I called Mr.Hemanth, requesting him to take the video down and he said he’d get back to me in a couple of days. I then texted him multiple times and he gave me a timeline of a week or so to take it down. A couple of months passed by and there was no response, I was at the lowest point of my mental health around this time, and every single time someone googled my name those three videos used to show up on top, as people were too nosy and curious to know about what was happening in my life” she said through her post.

After seeing no response from the youtube channel, Deepa said that she made legal proceedings and also made a cop to contact the you tube channel to remove the video. At one point, she made PR to send multiple emails for the channel to take down the video but they demanded money from Deepa, mentioning that they hurt their ego by making a police official call them in the best. She further said that she is “emotion-free” when it comes to Abishek and said that she doesn’t like people reminding her about such thoughts after watching the video. She requested “Talks of cinema” to take down the video through the post which was posted a couple of days ago.

Now, on Thursday, she came up with another post saying that she got shocked to realize that “Talks of cinema” had changed the title the videos and garnered traction. “The only way out right now is to report these videos, so YouTube takes them down. Requesting all of my followers and friends
to help me prove this point to them. Humbly requesting you all to take little time out and report a couple of videos that Im going to post links for, in my “STORY HIGHLIGHTS” named “REPORT”. Please leave a “+1″ in comments here, once you ve reported” said Deepa and thanked people who supported her virtually.