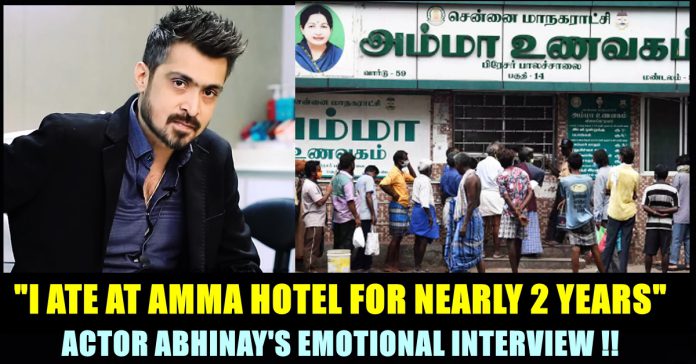 Actor Abhinav who rose to fame among Tamil cinema audience through Selvaraghavan- Dhanush’s debut film “Thulluvatho Ilamai” has been appearing in the prominent you tube channel to talk about the hardship he is going through due to the denied opportunities. The actor made a shocking statement saying that he has been eating at “Amma” hotel due to poverty and talked about the politics that is taking place in Tamil cinema to stop his growth.

The actor said that himself eating at “Amma” canteen for one year and eight long months was reason behind his massive weight loss. He said that there was no nutrition and started telling the prices of the food items that is being sold in “Amma” canteen. The actor became emotional and shed tears while talking about the demise of his mother.

“I ate at Amma canteen for one year and 8 months. There was no nutrition. That is the reason I have lost 12 kilograms. I won’t mind saying that. That is not demeaning. I survived on it. Few people doesn’t have it. Ask me the rates. Curd rice is 6 rupees, Sambhar rice is 6 rupees, 1 Idly costs Rs. 1, I have some health issues also. Not life threatening” he said in the interview.

“I started facing many disappointments after my second film. It was a flop. I was having 8 films at that time. All the 8 films got shelved for unknown reasons. All of them were prolific producers and they didn’t ask their advance back. But that was a biggest disappointment of my life. I was building a dream fort with those opportunities but they tumbled down in front of my eyes” Abhinay said in the interaction.

“I don’t have facility at all. It is just a room and a bathroom. What do you mean by facility ?” Abhinay asked while shedding tears. On answering to why he is not married yet, Abhinay said that he didn’t get a girl to marry and added that he is not a Gay in a light manner. Abhinay also says that he went into depression after his mother’s demise and slept in a car for five long days. We used the bathrooms in petrol bunks at that time.” the actor said.