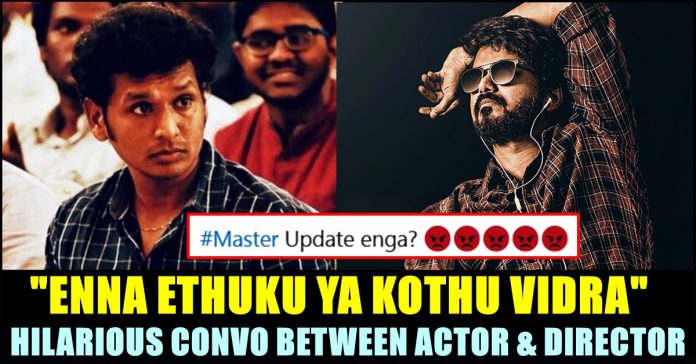 Actor Shanthanu and Director Rathnakumar are having a tough time in Twitter since they signed Lokesh Kanagaraj’s “Master” for acting and writing respectively. Fans of actor Vijay who has potential to trend a hashtag worldwide in Twitter are storming onto the posts of the stars only to demand updates about their favourite star’s upcoming film.

Having no authority to open about the updates of the film they are working, both of them can be seen managing the fans with witty replies and funny photo comments. One of the interesting fact about this episode is, that both of them are ardent fans of actor Vijay themselves. It is evident through their social media posts which they uploaded before signing “Master”.

Now, in an appreciation post of Shanthanu about Dulquer Salman’s “Kannum Kannum Kollayadithaal” film, one of a fan of actor Vijay used a clip of popular Vadivelu comedy to ask update about “Master”. Shanthanu, in his post said that “KKK” is a winner and wished the team to taste a huge success.

To this post, the fan whose twitter handle name reads as “Thalapathy Siva” posted a video of comedy actor Vadivelu getting beaten to ask update to Shanthanu. He wrote “#Master Update enga?” with angry emojis. Here’s the hilarious video :

Shanthanu who is very much interactive with his followers in the micro blogging social media site, immediately replied to the fan by saying that it will come at the right time. He further added that himself and Director Rathnakumar won’t open in prior, no matter how hard they get beaten.

Rathnakumar who got mentioned by Shanthanu, posted a trending meme template and asked Shanathanu “why are you dragging me in this ?” in Tanglish. “Enna yethuku man kothu vidra” he wrote in his reply.

Check his reply which got more than thousand likes as soon as posted :

Vijay’s Master is slated to release on April month and most of the fans are believing that the film is going to release on the 9th of the fourth month. The makers recently released “Kutti Story” single in youtube which became a massive hit. Having released three looks and one single, the makers are expected to announce the date and venue of audio launch event soon. Fans eagerly waiting for Teaser, Trailer release dates as well.