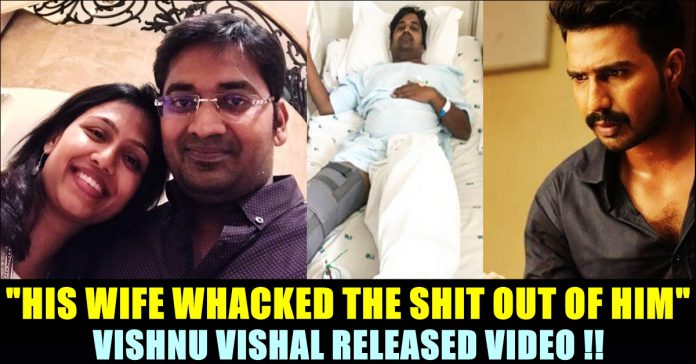 Comedy actor Karunakaran who rose to fame through Nalan Kumarasamy’s “Soodhu Kavvum” was debuted in Sundar C’s masala comedy film “Kalakalapu”. After doing prominent roles in films such as “Pizza”, “Jigarthanda”, Karuna promoted himself as a comedy actor and appeared with actor Ajith in his “Vivegam” and with Rajinikanth in “Lingaa”.

His humour worked out in films such as “Yamirukka Bayamen”, “Kappal” etc. Recently, the actor was admitted to hospital due to a minor surgery in his leg which caused by an accident that took place in his upcoming film Maanadu’s shooting spot. Karuna is playing a key role in Simbu-Venkat Prabhu’s political drama “Manadu”.

During last February, Karunakaran had injured his leg while shooting for the star studded Maanadu produced by Suresh Kamatchi. However, the actor continued to take part in the shoot irrespective of the injury. Amidst this lockdown, Karunakaran decided to make use of the free time by undergoing a surgery. He who told media that he feels better now, restrained from working as per the advice provided by his doctors. Pictures of the same surfaced in Internet couple of weeks ago.

Now, actor Vishnu Vishal, close friend of Karunakaran with whom he worked in films like “Indru Netrru Naalai”, “Ratsasan”, “Silukuvarpatti SIngam” has posted a video of Karunakaran chilling during his rehab session.

In his post, to everyone’s shock, Vishnu Vishal came up with a new theory saying that the “Iraivi” actor got injured due to his wife’s whacking. Vishnu who said it in a humorous way tagged the Instagram account of Karunakaran’s wife. In the video Karunakaran can be seen chilling by hearing a vintage song which starts like “Manam Pona Pokkiley”

“My buddy @karunakaran.kalidas is recovering fast after his ACL surgery… Looks like he is enjoying his rehab… So how did he get injured..?? I think he is hiding the truth … His wife @thendralkarunakaran whacked d shit out of him during this lockdown. But he says injured during shoot…” read the tweet of the actor.

My buddy @karunakaran.kalidas is recovering fast after his ACL surgery… Looks like he is enjoyin his rehab… So how did he get injured..?? I think he is hiding the truth … His wife @thendralkarunakaran whacked d shit out of him during this lockdown🤣🤣🤣 But he says injured during shoot…

Karunakaran is also known for his online rivalry with the fans of actor Vijay. On the work front, Karuna is expected to be seen in Simbu’s “Maanadu”. Comment your views on this hilarious tweet of Vishal !!