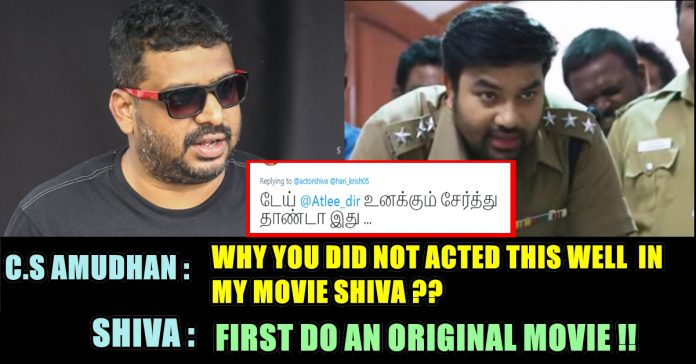 CS Amudhan returned to filmmaking after eight years with the sequel to his debut film Tamizh Padam. It isn’t by design though, given he made another film in between, Rendaavadhu Padam, which looks to have been shelved. Admittedly, he didn’t want to follow up Tamizh Padam with another spoof, but the passage of time in between, he says, got him excited again about working on one. When the director was asked if only people who have extensive knowledge of Kollywood films can enjoy the movie, he praised his hero by saying “Shiva’s mere presence is enough to have you laughing. And in any case, we only draw from iconic, memorable moments from Tamil cinema that almost everyone is usually aware of.” When he was asked how easy to do script for films like Tamizh padam 2  he said “It actually is. (Laughs) For me, anyway. When it comes to this genre, where I can write 10 scenes in an hour, others struggle to write even one. Perhaps the reverse will happen when I begin writing a serious film.” He also said Actor Shiva is the only one who can do justice for a film like Tamizh Padam 2. He said ” I mean, think about it. Which other actor can do such a film convincingly? It’s usual for directors to claim that only the hero they have used could have done it, but in the case of Tamizh Padam and its sequel, this is actually true. Shiva and I complement each other really well. Also, his baby face makes it very hard to get too angry at him.” While the director was praising his hero this well a hilarious statement from Actor Shiva on his director surfaced on twitter. That is when the director asked about Shiva’s performance in Pyar Prema Kaadhal promotional selfie video which was shared by Yuvan Shankar Raja.

Watching this Video C.S Amudhan asked Shiva “I asked you very much for our film , but you have showed your acting skill for Pyar Prema Kadhal” Check out his tweet here :

For this comment Actor Shiva brutally trolled his director by saying “They are doing film with their own story. You do like that. We can think about it later”.

C.s Amudhan did not left the conversation there. He replied for this statement of Shiva too. Check out his reply here :

On seeing this conversation here’s what fans reacted :

What do you think on this hilarious conversation comment below !!