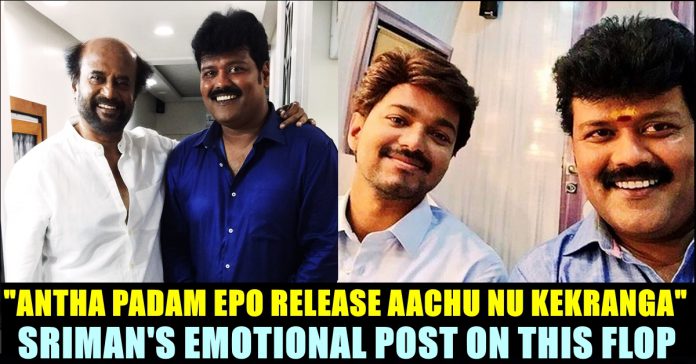 Actor Sriman who is acting in Tamil films since 1993, impressed fans through some of his character roles. Known as a close friend of actor Vijay, Sriman’s performances in films such as Friends, Pancha Thanthiram, Aayutha Ezhuthu, Sethu, Love Today, Kanchana series made an impact among fans of Tamil cinema. Lately, he appeared in Rajinikanth’s Darbar in a role where he was supposed to confront Superstar actor.

Having acted in more than 50 films as a character artist, Sriman is still busy in sharing screen space with top actors of Kollywood such as Rajinikanth, Kamal and Vijay. He is expected to appear in “Master” in a significant role as well. Now, the actor came up with an emotional post in his official twitter account, explaining how his hard work for one of a recent film went unnoticed.

Ulkuthu is a Tamil film, released on 29th of December in 2017. The film had “Attakaththi” fame Dinesh and Nanditha Shwetha in the lead roles. Sriman played an important role in the film and the actor’s recent twitter post depicted how he feels for the film being unnoticed. Sharing a tik tok video of one of a user, Sriman said that the film’s wrong release timing made all his effort to go in vain. He said people who are watching it in online platforms now, asking him when the film got released. The actor further said that he can’t question anyone and said that no one can be blamed.

In the video he shared, we could see the actor in a whole different dimension unlike his other movies where he would appear as a mere comedian. Sharing the video, Sriman wrote “Wow Ulkuthu nice scene wrong time release made all our effort unnoticed, when people appreciate today after watching the film in Amazon Netflix and on other social media platform , they simple question is when was this film released, what to answer whom to blame god bless all” in his tweet.

Check out his tweet below and the video he shared :

Wow Ulkuthu nice scene wrong time release made all our effort unnoticed, when people appreciate today after watching the film in Amazon Netflix and on other social media platform , they simple question is when was this film released, what to answer whom to blame god bless all pic.twitter.com/sHANKZXn8Z

This post from the actor garnered wide attention and many of his followers appreciated the performance of the 48 year old actor. Check out some of them below :

That’s the greatness of public, if they notice something good they respond immediately with their appreciate with love, as I always repeat saying a constant line to all my friends machee hard work with passion and brains never fails

In Darbar, Sriman appeared as a cousin brother of actress Nayanthara. On seeing Aadhithya Arunachalam (Rajinikanth) romancing Lilly (Nayanthara), Sriman would request the protagonist to stay away from his sister. He would reason the age factor between the hero and heroine and would make a sly warning to Aadhithya in a way of asking him not to meet his sister again. This characterization of Sriman irked the online fans of Superstar Rajinikanth which he considered as a success of his acting performance.

200% true what I did was my role given by my director supported by superstar y if you get angry then that is success, it goes to Director sir and to the legend superstar. Who permitted me to perform

Comment your views on these tweets of the actor !!