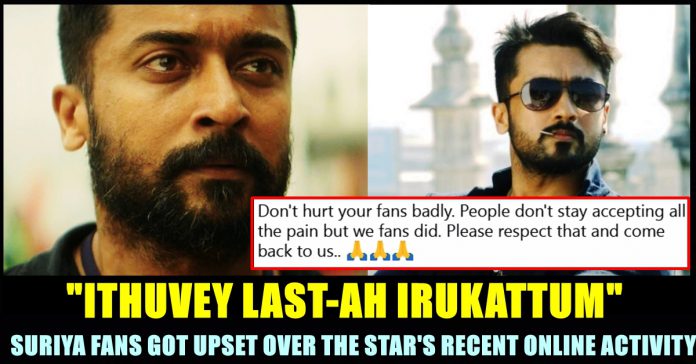 Actor Suriya’s own fans expressed their dejection over the star’s recent twitter activities and has been asking him to listen to their requests through tweets. They got upset over the actor promoting movies of other tier 2,3 actors and releasing the first looks, teaser, trailers of their films through his official twitter handle. Suriya enjoys 7 million followers for his official Instagram account and the reactions started pouring after Suriya released the teaser of “Velan” starring Mugen Rao of Bigg Boss fame. The film also stars actor Prabhu in a supporting role.

Releasing the teaser, Suriya wrote “Hearty wishes and respects to #ActorPrabhu na, who loves everyone like his own!! Wishes to team Velan!” in his tweet that was posted on Tuesday evening. Check out his tweet below :

Hearty wishes and respects to #ActorPrabhu na, who loves everyone like his own!! Wishes to team Velan! https://t.co/hf2Xp46AZU

Reacting to this tweet, a fan said that he is using Twitter for past 3 years and didn’t get a single like from his idol Suriya and a tweet of another fan read “They are using your hardwork and dedication by promoting there movies. Hope you understand we fans still care about you. you are too good to people”. A number of fans also blamed Rajasekar Pandiyan, Director & Co-Producer 2D Entertainment which was established by Suriya.

They are using your hardwork and dedication by promoting there movies. Hope you understand we fans still care about you

you are too good to people 🙄

Indha raja va first torathi vidunga , he is misusing you don't know when will u be aware

Just sit for a while and think ….

Do u give us back the same love and respect that we fans give you ???? pic.twitter.com/Y3GEBpISdO

Tweeting for other's and RT ing ur movie updates . Is this fair anna ?!!! U promised us interactions , what we r getting is Promotional tweets for other's , even tweets about movies would have made us happy. We are here only for u , do respect our love for u ! 😔

Don't hurt your fans badly. People don't stay accepting all the pain but we fans did. Please respect that and come back to us.. 🙏🙏🙏

People are overshadowing you and not letting us express our pain to you.

@rajsekarpandian do u have any senses?/
always using his ID for promoting other films and not using his ID for his own movie??
Twitter , insta , FB all 3 medias reach gone
these guys use @Suriya_offl ID fr thier promotions and wen his movie update comes no one praises💦

Miles to go before I sleep!! Signing off from Twitter! Let positivity prevail!!! #JaiBhim

On the work front, Suriya’s “Jai Bhim” is going to release directly on Amazon Prime and his “Etharkkum Thuninthavan” directed by Pandiyaraj is expected soon as well. Suriya also producing movies under his production banner 2D entertainments.