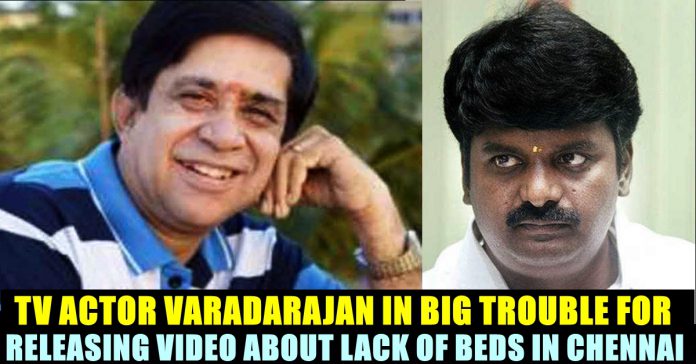 Followed by Varadarajan’s message to the people of Tamilnadu regarding the lack of bed facilities in hospitals, minister Vijayabaskar addressed his statement in the press meet and said that there will be severe action taken against the TV actor for spreading fake news. The actor came up with a clarification video saying that the video is meant for only 25 members of his troup not for entire Tamilnadu. However, reports suggests that Varadarajan has been booked under four sections of IPC act.

Multi talented personality T.V Varadarajan who is known for acting in several Television serials and for his news anchoring stint in Doordarshan channel, posted a video in his official social media platform and it went viral across several platforms.

Varadarajan, in his video conveyed a message on how hard it is to find a hospital bed for a patient who got infected by the virus. He tried to make people understand about the struggle by sharing his personal experience. Varadarajan and his younger brother found it very difficult to find a hospital to admit one of their closest family friend who showed symptoms of Coronavirus.

“I wanted to shared about this incident which happened today morning to me and my brother. By sharing this, I wanted to warn you all about this Coronavirus. One of my family’s closest friend, you people know him as well. I don’t want to reveal his identity. He had fever for past two days and today morning he had a severe breathing problem and it looked like a Corona attack” says Varadarajan in his video.

“When we tried to admit him, no hospital had a single bed. All big hospitals in Chennai. Even in Government hospitals, there was no single bed for our friend. Hospital authorities are asking us not to go the hospitals as they can do nothing to help us. They said that they couldn’t able to treat him. We even approached Government secretary by using our influence. We talked with hospital MD, owner and chairman. Nobody could help us. They are very frank as there is actually no bed to admit him. He is a very disciplined person, we don’t know how he got infected” he said who went on to warn people who are roaming outside without reason.

Minister Vijaya bhaskar, in his reply said, “In Chennai alone, there are 5000 beds available with oxygen and ventilator. There is also CCC centre which consists 17,000 bed facilities. We are going to take action against Varadarajan for spreading fake news during this pandemic situation.”

Followed by this Varadarajan released another video saying that he uploaded the video only for his drama troupe members. “It was forwarded by someone and went globally viral. I am getting calls from everywhere. Central and state government are against the virus in full swing.” appreciated Varadarajan and requested people to cooperate them.

However, reports have suggested that the actor has been booked under four relevant sections of Indian penal code.