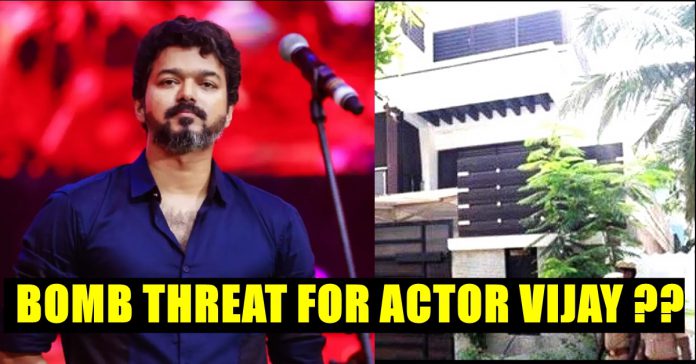 Actor Vijay is one of the very few actors who has huge fan following in South India. Having acted in more than 60+ films, he is in the top race to become the highest paid actor in Kollywood. His most recent film is Atlee’s BIGIL and it is announced that he going to be featured in Lokesh Kanagaraj’s film which is tentatively titled as Thalapathy64.

Now to our shock, a recent reports suggests that police has received a bomb threat to the house of the “Bigil” actor. The report of Indiaglitz says, on Saturday night, the control room of Tamilnadu police has received a call from an unknown person who claimed that there is a bomb in actor Vijay’s house which is set to explode in anytime soon. He disconnected the call abruptly after saying it according to Samayam.

As soon as the phone call surfaced, police officials conducted a search in the house of the actor and no bombs were found. Followed by this, appropriate police forces were alerted and an enquiry to Vijay’s father S.A Chandrasekar has been made by the police officials. It was reportedly made in the Saligramam residence of the director/actor according to report.

The house of the actor at Panayur, ECR was also checked and the security was tightened. Police officers registered a case under cyber crime and while investigating regarding the same, it was found that the call was made by a youngster who was located in Alappakkam near Porur. When Police questioned him about the phone call, his answers were contradictory to his previous statements and were confusing.

This news shocked the fans of the actor who are social media and they are very much worried about the safety of their idol. On June 22, 1974, Vijay was born to S. A. Chandrasekhar who is a Tamil film director and Shoba, a playback singer and carnatic vocalist. Actor Vijay who is very much attached to his parents as every other son, married to Sangeetha on August 24, 1999, on their wish. The actor is now a father of his two children, Jason Sanjay and Divya Sasha.