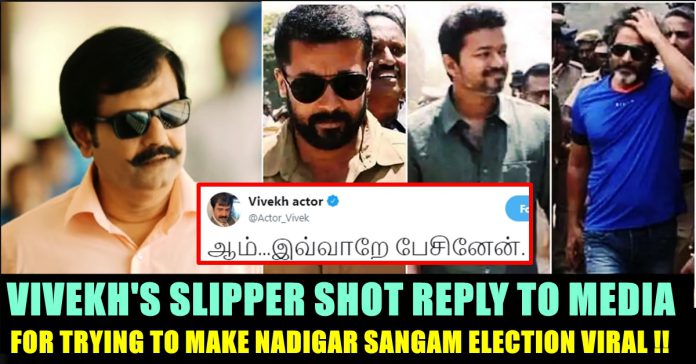 Kollywood is split into two factions, as the election to South Indian Artists Association, popularly known as Nadigar Sangam, is set to be held this Sunday (June 23) at St.Ebas Higher Secondary School in Mylapore. It is the same place where the Nadigar Sangam elections were held in 2015.

Both Pandavar Ani and Swani Sankaradas Ani are making slanderous and objectionable remarks against each other as they try to woo the 3,000-odd voters. Out of this, 1,500 votes belong to drama artists and technicians. 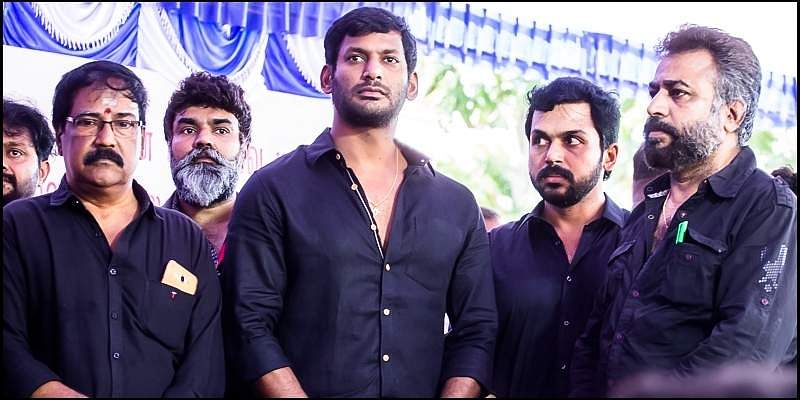 The present office-bearers – Tamil actors Nassar, Vishal Reddy and Karthi – are being challenged by a group led by actor-director Bhagyaraj, Udhaya, Kutty Padmini and Ishari Ganesh. A fresh team of a president, two vice-presidents, a general secretary, a treasurer and a 24-member executive committee will be formed after the results.

The votes hasn’t counted yesterday following an order by the Madras High Court on Friday that allowed the election to be held on 23rd but said the results shall not be declared till further orders.

As many top actors who has huge fan base are involved in this election, the election grabbed a lot of attention from the Tamilnadu media. This irked many responsible actors including actor Vivek who bashed them to make people aware about socially responsible issues.

In his speech Vivek said, “I appreciate the effort of you people on covering this election. This gives me happiness on seeing the hype you are creating. This is an election which involves just 2000+ workers. In the meantime, many serious thing takes place in this state. I request you to cover them and make people aware of it. Hundreds of students and public are desilting the lakes of Chithlapakkam and Manapakkam. Many people are posting videos on Rain water harvesting to make people aware of it. I appreciate you duty and can understand that you people are doing this because of prominent actors involved in this which will grab people’s attention. I request you to cover socially responsible things that I mentioned as well” the actor said in his interview. Sharing the video in his official twitter account, Vivek added a caption which read as “ஆம்…இவ்வாறே பேசினேன்.”

He received massive applause from his followers for the brave and bold speech. His followers started to troll media in the comment section as well :

Apart from being an actor , You are a responsible citizen !!! Superb sir.