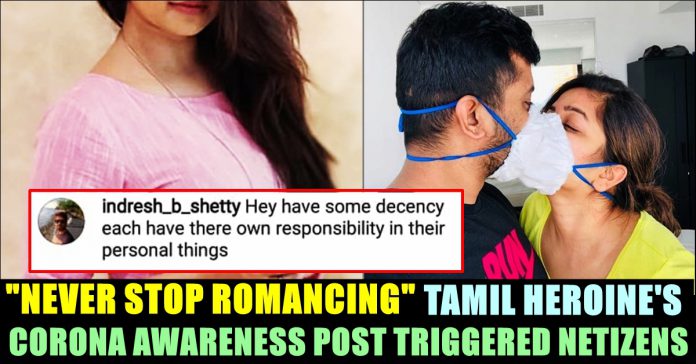 Popular television actress Nithya Ram posted a cozy picture with her husband and asked her followers not to stop romancing. Nithya Ram who works in Kannada, Tamil and Telugu productions. She began her career as an actress in Kannada television soap operas. In 2017, she played the main lead in the mega hit show Nandini. Nithya Ram enjoys more than two lakh followers for her official Instagram account. The actress got married to Australian businessman Gautham on 8th of December 2019.

😊i still remember how we started talking. Do [email protected] Can't forget this date ofcourse ❤️ When we started talking each other, i had no idea u @gauthamn12 would be so important to me. Thanks for being the perfect partner 💏 Happy talking anniversary ❤️ 😘😉@gauthamn12 #lovelife❤️ #bestpartner❤️ #thatfeelingwhen #hearingyourvoice #loveyouforever❤️ #thanksformakingmylifesobeautiful

Now, as Coronavirus is hitting the entire world, Nithya Ram has an important message to say. The actress uploaded a picture in Instagram in which she can be seen kissing her husband. The most surprising part about the post is that they both wore a mask each in a way of creating awareness to the deadly virus which is threatening the entire world.

This post received enormous number reactions from the users of Instagram. Most of them made fun of the post and few of them expressed their love as well. Check out some of their comments below :

Due to the Corona crisis, the entire country is trying to be safe and precautionary. The deadly virus killed more than 11,000 people across the world and more than two and half lakh confirmed cases has been reported across 186 countries around the world. World Health Organisation insists the people across the world to wash hands frequently and to stay home for few days to prevent it from spreading. They are also demanding people to wear safety masks while going out for emergencies.