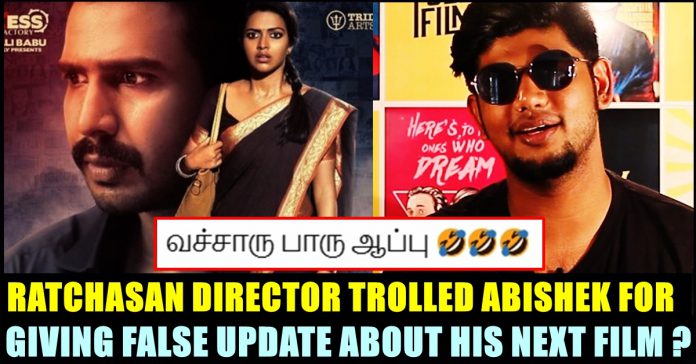 Mundasupatti became a sleeper hit in the year 2014 and the makers of it lauded by fans and critics for providing a quality film. Directed by Ram Kumar, the film starred Vishnu Vishal and Nandita in lead roles while Kaali Venkat, Ramdoss, and Anandaraj play supporting roles. The film produced by C. V. Kumar under his banner Thirukumaran Entertainments in association with Fox Star Studios, features music composed by Sean Roldan.

The film is set in the 1980s in a fictional village called Mundasupatti, where people believe bad luck will befall them if they are photographed. The story illustrates what happens when two photographers visit the village. This story is based on a short film which was directed by Ram Kumar himself in 2011 for the TV show, Naalaya Iyakunar. Mundasupatti released in 2014 to positive critical response and became a hit at the box office.

The successful duo went on to collaborate in another successful film “Ratchasan” which is a thriller. Now popular movie reviewer Abhishek Raja who is also known for giving updates about upcoming films posted a tweet saying that actress Athulya should act in the sequel of Mundasupatti through a tweet.

Actress Athulya is an actress who gained many fans through appearing in social media rather than acting in films. The actress is very active in social media by posting her photographs from her various photoshoots. As soon as this tweet surfaced from Abhishek, director Ramkumar himself responded to it in a sarcastic way to indicate that the news has no base at all. The director asked “Is it true ?” to troll Abhishek.

This reply from the director made many of the twitter users to troll Abhishek. They thought Abhishek has given a wrong update and roasted the reviewer like never before. Check out some of their reactions below :

However, the film reviewer came up with a clarification saying that he meant to troll actress Athulya for conducting more photoshoots. He replied back to the filmmaker by writing “Will photoshoots be allowed in the film?”

Will photoshoots be allowed in the film? https://t.co/4QAN7Os9Fy

However most number of fans didn’t believe Abhishek’s justification and trolled him more by saying that he is just coping. Director Ramkumar was committed to do a film with Dhanush after his blockbuster “Ratchasan”.