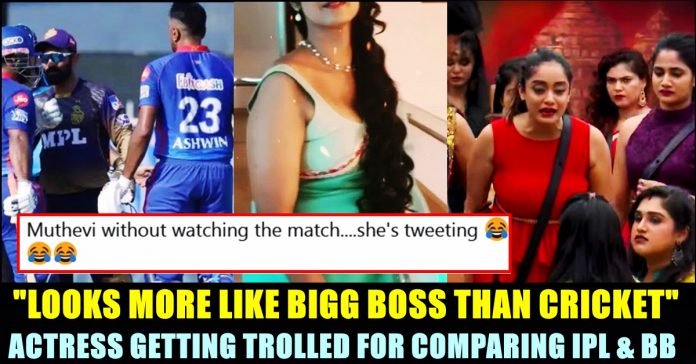 Senior actress Kasthuri who is pretty much vocal in her social media handles about the current affairs of our country, is getting trolled by a number of her followers for comparing Bigg Boss show with IPL tournament based on a verbal spat that took place between Ravichandran Ashwin and Eoin Morgan during Kolkata Knight Riders and Delhi Capitals match in the ongoing Indian Premier League. Many commented on the actress’s post, alleging that she is making a comment without knowing the entire context of the incident.

In the match that took place between Delhi Capitals and Kolkata Knight Riders on Tuesday, a verbal spat took place between ace spinner Ravichandran Ashwin and England Captain Eoin Morgan over Ashwin trying to get the second run after the ball hit the pads of his partner Rishabh Pant. Initially Ashwin had a conversation with bowler Tim Southee and the conversation turned argument after Eoin Morgan intervened to exchange words with the Chennai born spinner.

IPL is watched diligently by young people in their formative age. Aggressiveness is all good, but it would be nice to see senior players show some grace in the spirit of the game. Yesterday for a while #KKRvDC looked more like BiggBoss than cricket.#ashwin #morgan #southee #DK pic.twitter.com/HJCUV9WR8z

She got trolled for her tweet as many found that the actress had tweeted without knowing the whole context of the issue. Check out some of the reactions below :

Do you know what happened there. Don't just type any rubbish for just the sake of retweets

Common stop this saintly https://t.co/N5wmjUVUKN happens in all sports.And how about you own cine field.Everthing is done keeping your advice in mind?

Oh well there was a lesson to cool things down too..courtesy DK..

Someone always have to be keep ranting