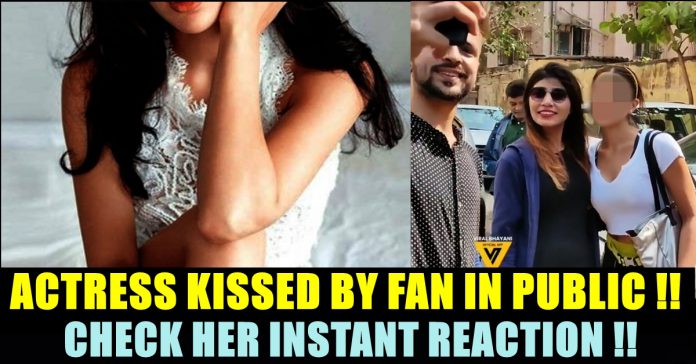 Celebrities attracting wide audience for their public appearance is not something new. Many fans would try to take pictures and autographs with them to make the moment as a memorable one. Now, in such incident, a fan trying to kiss a popular actress has grabbed the headlines in several media portals.

Sara Ali Khan, daughter of popular bollywood actor Saif Ali Khan is known for her way of greeting the paparazzi. The “Kedarnath” actress would always greet the paparazzi with a wide smile in her face. On Thursday, outside her Pilates class, she did the same unlike other celebrities who would most probably avoid them.

To our shock, while other fans took pictures and selfies with the actress, one of a fan tried to kiss her in the hands. The actress who came out of her Gym decided to pose for few photographs with the fans who requested her. Suddenly, one of those fans tried to kiss her in her hand. The 24 year old actress was visibly upset but she continued to pose with other fans before leaving the place. The fan who kissed her pushed away by one of her bodyguards.

#saraalikhan snapped at her pilates class today. One of the fans tried to kiss her hand. Not so easy 🤛🙁 just because she has been so sweet. #viralbhayani @viralbhayani

In an earlier interview with the media, Sara Ali Khan opened about being friendly with the paparazzi. “Imagine the reverse, Irrespective of how you look, when you walk out of the Gym, if seven odd photographers not clicking your photos, that is also a problem you know” she said to Miss Malini.

Sara Ali Khan who was busy holidaying in Maldives with her brother Ibrahim Ali Khan and her mother Amrita Singh, returned to Mumbai earlier this week. The actress had been sharing pictures from her getaway on Instagram, for which she trended big time.

Sara Ali Khan born to Saif Ali Khan and Amrit Singh, was recently starred in Rohit Shetty’s Simmba opposite to Ranveer Singh. After graduating from Columbia University, Khan ventured into acting by playing the leading lady in the 2018 films Kedarnath and Simmba. Both films were commercially successful and the former earned her the Filmfare Award for Best Female Debut.