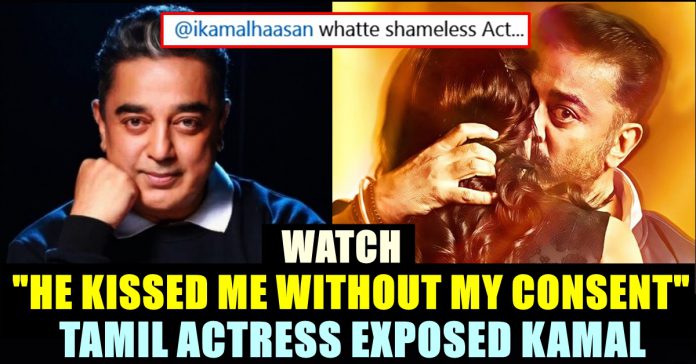 Yesteryear actress Rekha who recently grabbed the attention of TV audience through the reality cookery show “Cooku With Comali” has revealed about a fact that happened during the shoot of her significant film “Punnagai Mannan” with legendary actor Kamal Haasan. The actress said that she got kissed by the actor without her consent and expressed her disappointment over it. She said it in an interaction with Cinema Vikatan before 9 long months ago. The particular video of the actress explaining about the incident is doing rounds in social media platforms now.

As we all know, Kamal Haasan is a man of perfection and the film “Punnagai Mannan” was directed by his master K. Balachander. In the film Kamal played the role of “Sethu” and Rekha played “Ranjani”. The film is about how a man who miserably failed in his love life, recovers back from the tragedy to start a new life. The film would start with Sethu and Ranjani arrive at a cliff where they plan to commit suicide due to the pressure put up by Ranjani’s parents against their marriage.

Knowing that they are going to die, before jumping of the cliff, they both would share their last moments with uttermost love for one last time. The song “Enna Satham Intha Neram” is still ruling the play list of many. Watch the video below :

Now, in this interview, Rekha has said that she was forced to get kiss from Kamal Haasan at that time. “I was so small at that time as I just finished my 10th standard at that time. I don’t know a thing about Cinema at all at that time. During the making of that scene at the falls, Balachander sir asked me to close my eyes as I was about to die, according to the scene” Rekha started explaining about the incident.

“Then he (Balachander) asked Kamal whether he remembers what he said. All of a sudden Kamal kissed me and we jumped. Then I said that my father won’t accept such things to them. They even convinced me that it will not look dirty on screen. I even told my mother that they kissed me without my permission. I gave several interviews regarding the same incident. Kamal and Balachander may still have a disappointment with me. But I have to tell the truth, right” she said.

The particular clip of Rekha explaining about the incident is now going viral in the micro blogging social media site with various kind of reactions. Check out some of them below :

This would have made the headlines if it happened in Hollywood. This is proper 'sexual harassment at the workplace'. Worst is, they've even planned it.

But since it's Kamal saaaaar and Balachandar saaaaar, it should be fine I guess. pic.twitter.com/alPAC7eXJy

இது தான் கமல் யோக்கியதை. Rekha Saying She didn't Know Kamal was going to Kiss him in punnagai Mannan Scene. He just decided and it came in the movie also . She was just a school student at that time! pic.twitter.com/PDM0y4Sgoy

Comment your views on this allegation of Rekha against Kamal and Balachander !!