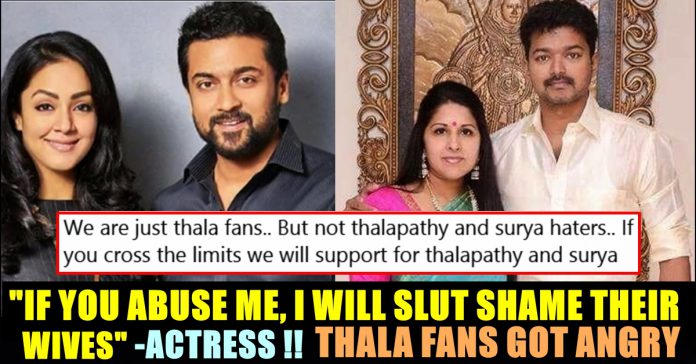 Meera Mitun released a video threatening the fans of actors Vijay and Suriya which created huge outrage among the fans. People demanding Suriya and Vijay to file a legal case on Meera Mitun for her derogatory comments about their personal lives but a set of fans wants them to ignore Meera Mitun as she is expecting them to react in order to gain wider fame.

Lately, Meera Mithun uploaded a tweet defaming actress Jyothika and now came up with a video saying that she will slut shame the wives of actor Suriya and Vijay if their fans abuse her with “T” word. “If I talk about any of my achievements or about my upcoming projects through my tweet, I have been constantly witnessing reply comments cursing me as “Thevdiya”. They are also using words related to that to curse me.” said Meera Mithun in the video who went to talk about Sangeetha and Jyothika.

“Will you guys keep mum if I abuse Sangeetha or Jyothika with the same word ? Jyothika also came from the same cinema film industry. She made an entry by begging her elder sister Nagma. I will also reveal about Vijay’s wife Sangeetha who lived in London. If fans of actors Vijay and Suriya kept abusing me that way, I will sult shame both of them in my every tweet. Don’t question me on that if I do so” she said in her video.

She also said that she will take strict actions against Cyber bullying and cyber crime once she becomes Chief minister of Tamil nadu. Watch the video here :

This is what you have taught (or paid ) ur fans ?Are yu really living up to your standards of a star @actorvijay @Suriya_offl using cyberbullies to threaten a woman,abuse a woman,if ur doing that better from tom don't call yourself as "MEN" let me send you set of bangles&Sarees pic.twitter.com/cmKkGTcuJF

This tweet created huge outrage among the fans of the actors Meera Mitun mentioned. The amount of abusive comments increased in vast number after this video of Meera Mitun surfaced. When the video of the former BB contestant reached 1000 plus likes, the abusive comments are receiving 2,000 plus likes from the twitter users. Even Ajith kumar fans got extremely angry and supported Suriya and Vijay. Check out few of them here :

Why nobody is filing a defamation suit on her? Just why? This is so wrong! No one can talk like this on a social forum.. @Suriya_offl pls file a defamation! she needs to stop bluffing!

Comment your views on these allegations of Meera Mitun !!