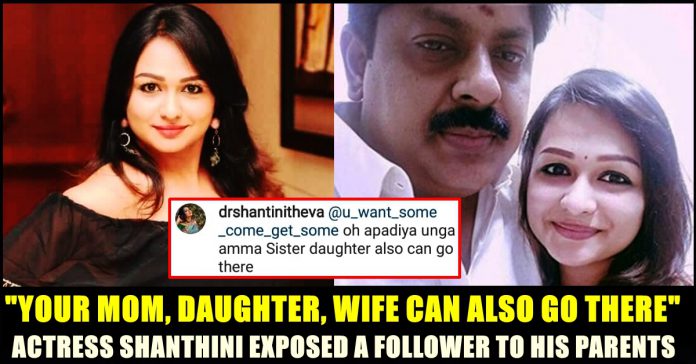 Actress Shanthini who recently grabbed headlines after making complaint against Former ADMK minister Mani kandan, reacted to the negative comments that surfaced in her recent social media posts. Going by the name, “Dr. Shanthini Theva”, the “Nadodigal” actress enjoys 60k followers and has posted nearly 400 posts. Reacting to one of the comments that surfaced in her recent post, Shanthini captured screen shot of it and sarcastically said that the parents of the commenter would feel proud.

Shanthini acted as a newly married woman in the Samuthrakani directorial which had Sasi kumar in the lead role. After acting in the film, the actress grabbed the headlines after making a complaint against former ADMK minister Manikandan for abusing her. A special team arrested former AIADMK Minister M. Manikandan from Bengaluru, on charges of raping the actress who made the complaint.

After the arrest, Shanthini has been uploading her pictures from the photo shoots. Check out some of her recent posts below :

On Wednesday, Shanthini uploaded a picture of herself posing from a scenic pond. “Indulged with natural” read her caption for the post.

On seeing this post of the actress, a follower dropped a comment saying that he thought Shanthini is taking a leak. Replying to him, Shanthini said “Oh Apdiya Unga Amma Sister Daughter also can go there. sorry wife maranthutten” through her comment.

Here’s the screen shot of the comment and Shanthini’s reply :

Weeks ago, She who introduced herself as a former tourism ambassador of Tamil nadu, said that she became familiar with the politician through a PRO named Bharani. “I work close with the tourism department and my basic job is development” she says while introducing herself.

Minister Manikandan who is also a Doctor, approached Shanthini to do business, according to her statement. “The business dealing became a friendship and it turned out to be a relationship. He who said that he is not getting good care from her wife, wanted to marry me. I believed him and started proceeding the relationship. “He asked me some time to marry me and I traveled with him everywhere, including his political journeys” she said to the media.

“I decided to quit the relationship three weeks back as he tortured me mentally and physically a lot. At that time, he showed me a picture that he captured without my knowledge. I want him to be punished legally. I need justice. I want him to delete the photos of mine.” Shanthini said in the press meet. Read : “Nadodigal” Actress Shanthini Accused Former Minister Of Cheating Her !!