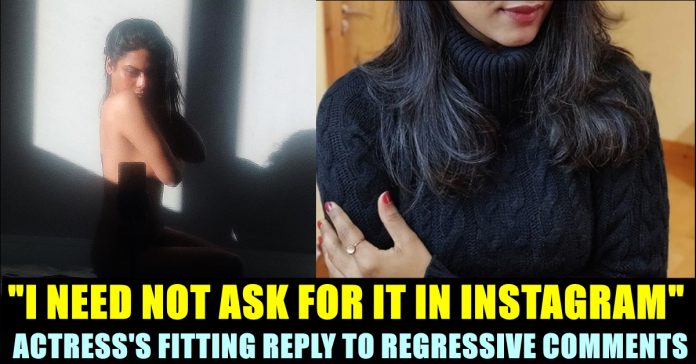 Days ago, Odia based actress Sunita Garabadu uploaded a selfie picture of herself in her official Instagram account in which she was seen posing for the camera without wearing clothes. The post didn’t go well with a number of social media users as a result of which the Odia based actress came up with a video slamming the people who spewed hatred at her and her family members.

Apart from acting in films, Sunita is also known for hosting major sporting events such as Indian Premiere League, Champions Hockey Trophy and Hockey India league. She who completed a course from Air Hostess Academy, is pretty much active in Instagram. So far, the actress had uploaded 1200 plus posts.

In one of her recent posts, she uploaded a selfie of herself without earing clothes and wrote “Sun soaking while fantasizing about Spain” as her post’s caption.

After knowing that this post didn’t go well with her followers, the actress came up with a video slamming “people with small minds”. “I am making this video in context to a post I made four days ago which didn’t go well with lot of people on my account and even with people who are not my account” Sunita started her video.

“They have been trolling me, sending me hate messages, abusing me, my family, my husband, talking shit about my work in India, talking about my house in India and about my house in here. People also gone to the extend of reporting the post and asking Instagram to block it” the actress said in the video she uploaded and said that added that she is confident about the post’s content.

“I am confident about that I haven’t gone against any terms and conditions of Instagram and that’s the reason my post is still out there. To all these people who are doing this, I just want to say that the world is so much bigger, distinct and vaster than your small minds. So please grow up” she lashed out.

“Secondly, I need not ask for it Instagram because I get it when I ask for it and I am already getting a lots of it in my life. And I also want to say that everything about a woman’s body is not related to sex. Stop seeing a woman’s body only sexually. It is not an object to have sex or intercourse” Sunita said and added that lot of problems in the world related to rape culture and women exploitation will be solved in the world if people stars understanding it.