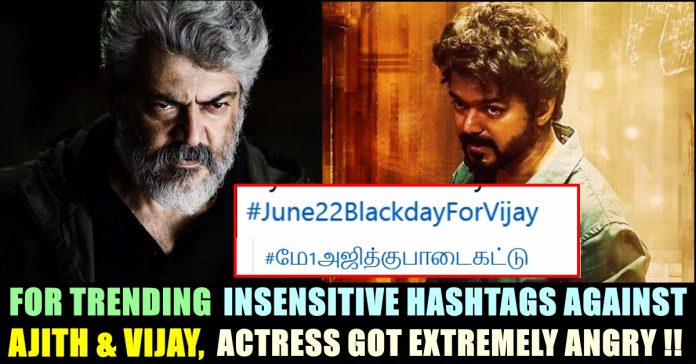 In a way of reacting to the fans of actors who are involving in verbal spat, Actress Kasthuri said that it is a shame to their idols. Actress Kasthuri Shankar has been calling out the fans of Ajith kumar for quite a long time in Twitter. The 45 years old actress has been facing cyber abuse by a group of people who are projecting themselves as the fans of actor Ajith kumar. Few days ago, Kasthuri caused a Twitter trending against those people for involving in abusive conversation against the actress.

Now, she posted a tweet mentioning both Vijay, Ajith and their fans. She said those actors won’t get affected due to the curse of their haters. But they must be shamed, she said. “Even while the entire country is burning, these people has nothing better to do in their lives?” she asked who also added the popular phrases of both the actors, “Ignore Negativity and Live and Let Live”.

It all happened when a set of fans started trending tags against the birthdays of Ajith and Vijay. “June 21 Black Day For Vijay”, “May 1 Ajith ku Paadai Kattu” were the hashtags that got trended in Twitter. Kasthuri, recently grabbed the headlines recently for being the cause for the hashtag #DirtyAjithFans to trend nationwide. The incident happened days earlier but the actress is still continues to slam the alleged fans of the actor in the micro blogging social media platform. Kasthuri enjoys more than 2 lakh followers in Twitter, through which she has been expressing her thoughts and opinions.

The fan wars and verbal abuses in social media platforms are increasing in daily manner. “Thalapathy” Vijay and “Thala” Ajith are two of the most talented actors in the cinema industry of Tamilnadu. The rivalry between both the actors is less as far as the rivalry between their fans is considered. Its been a long time since actor Ajith kumar and Vijay declared as official rivals. Only on few occasions both these actors movies released together but on that day the opening of both the movies would be a deadly one.

However, fans who are required to be united at this pandemic situation, behaving in this abusive way is harmful, not only for them, but for the entire society. Comment your views on this tweet of Kasthuri !!